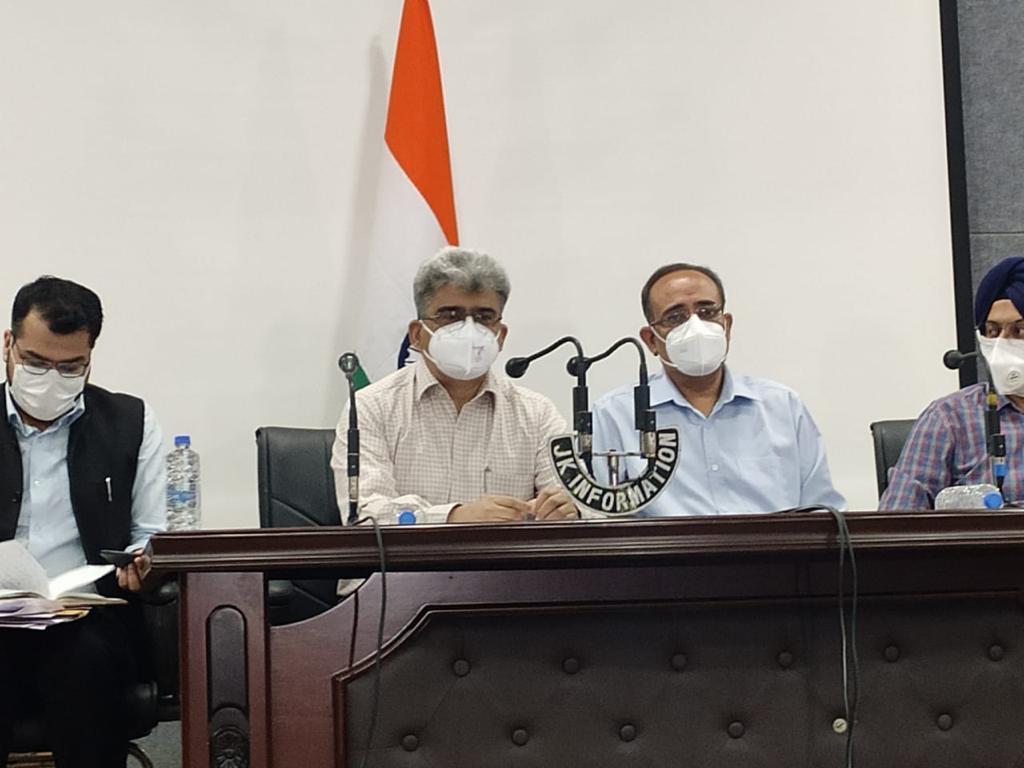 Srinagar, April 21: Jammu and Kashmir government on Wednesday said that Covid graph is rising in the Union Territory and the situation is “challenging” as the rate of growth in positive cases is 8. 12 percent which is more than what it was last year.

Addressing a joint press conference in Jammu, Financial Commissioner Health Atal Duloo said that Covid situation in J&K is challenging as the graph of positive cases is rising rapidly. “At present we have 13400 active cases. Last year we had 22000 positive cases at a peak. In April this year, there were 77 deaths. Growth rate in cases is 8.12 per cent. Mortality rate is 1.38 per cent in J&K. Situation is challenging if we compare it with last year’s April figures,” Duloo said.

He was flanked by Principal Secretary to the government and government spokesman Rohit Kansal. Duloo said that 28 cases of UK Covid strains and other new strains were reported in Jammu and none from Kashmir. “We are conducting 40,000 tests a day in J&K UT,” he said, adding that the government has framed a 5-pillared strategy to deal with the emerging Covid situation.

Explaining the strategy to contain the virus, Duloo said that it entails testing, contact tracing and surveillance, Isolation and treatment, Covid appropriate behavior and Vaccination.

ON TESTING AND CONTAINMENT:

Duloo said that 40,000 tests are being conducted per day of which 10,000 are Rapid Antigen Tests and 30,000 RTPCR. “Our testing rate is 2500 per million,” he said. “RTPC facility has been set at all the medical colleges including the new ones established recently,” he said.

“One RTPCR machine has been installed at SKIMS Soura, one more will be installed at GMC Jammu and another one at GMC Srinagar very soon.” The Financial Commissioner all the travelers are being tested without any fail.

“In April, 1, 64000 contacts were traced, 120 containment zones identified and 32000 tests conducted in containment zones of which 1680 were found positive. He said that at present there are 12600 people who are in home isolation and 860 patients are admitted in various hospitals of which 48 are on ventilators and 534 on oxygen support. About the bed capacity, he said that there are 6000 beds available in J&K hospitals exclusively for Covid patients. “Occupancy rate is 13 percent,” he said.

Duloo said that there are 2500 oxygen supported beds and 534 beds are occupied. “We have 10,000 oxygen cylinders available and 3500 medium cylinders as well. Oxygen generation plants will come in all district hospitals, associated hospitals and also at sub-district hospitals. Of the total 36 hospitals, at the 23 hospitals oxygen plants have been either installed or are being installed,” he said, adding that with the fresh move, there will be an addition of 2000 oxygen supported beds soon.

Besides, all the hospitals have adequate supplies of Personal Protection Kits, N-95 masks, glove’s, sanitizers and other preventive kits.

Dullo said this is the vital tool to fight the pandemic. “We must maintain a social distancing of two meters, wear masks and do frequent hand washing. Mask is a social vaccine,” he said.

The Financial Commissioner said that 17,50,000 doses of vaccines have been administered to the people of J&K so far. “74 per cent health care workers have been covered, 77 per cent front line workers have also been covered, 3.6.7 per cent people who are above 45 years of age have also been administered the jabs. Earlier, there were some misconceptions about the vaccine but they all were false,” he said.

Asked whether the government was getting supplies of vaccines, he said at present there is an availability of two lakh does and supplies reach after every two days. “There are 1408 vaccination centers in J&K and the plan is to increase the number to 3000,” Duloo said.

UK AND OTHER NEW COVID VARIANTS:

So far, RTPCR tests are detecting positive cases effectively, Duloo said. He said that 28 cases of UK and new Covid variants have been detected in Jammu and no new Covid variant has been detected in Kashmir. Speaking on the occasion, Principal Secretary to the Government and the official spokesman Rohit Kansal said that the situation is evolving and measures will be taken.

“As far the testing is concerned, we are perhaps ahead of all states of India. This year we have a new weapon in the form of a vaccine to fight Covid compared to last year,” he said. Replying to a query about lockdown, he said that the focus of the government is to fight the Covid while keeping the economy going. “Situation is being reviewed constantly and if need arises, new measures will be announced as and when needed,” he said— kno