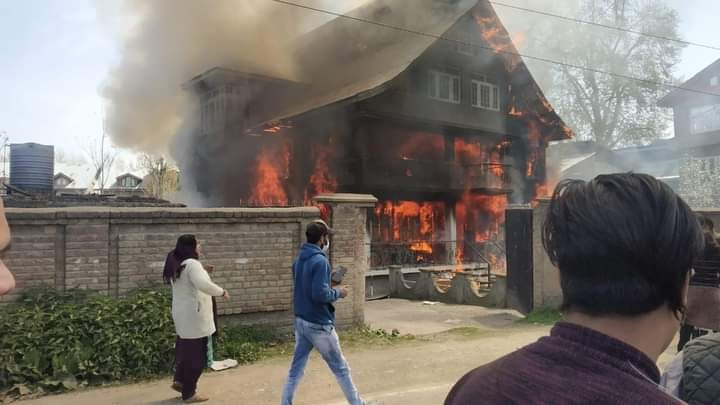 Anantnag, Apr 10: Soon after a lady committed suicide in Anantnag, the family (maternal home) of the deceased woman allegedly set the house of her in-laws ablaze on Saturday morning.

An official said that a lady had allegedly committed suicide by hanging herself at her home in Mominabad area of Anantnag.

He said the parental family of the deceased lady soon after her death set the house of her in-laws on fire.

The family alleged that the in-laws of their daughter have forced her to take this extreme step.

“We are investigating as to what led her to take such an extreme step. We will take strict action if the allegations are proved correct,” the police officer said.

A 32-year-old lady allegedly committed suicide by hanging herself at her home in Mominabad area of South Kashmir’s Anantnag district, officials said.

An official told the news agency—Kashmir News Observer (KNO) that a woman (name withheld) hanged herself with a ceiling of her room. “She died on the spot,” he said.

Meanwhile, police team has rushed to the spot and shifted the body to District hospital Anantnag for medical examination and Postmortem.

The proceedings have been started to know the reason for suicide, he said. kno