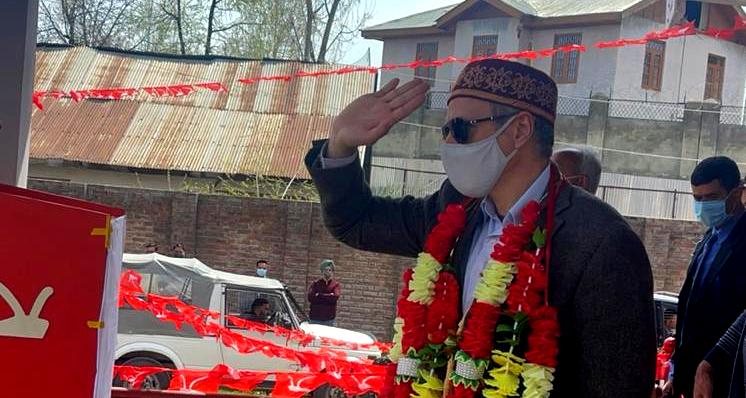 Srinagar, Mar 27: National Conference vice-president Omar Abdullah Saturday said while welcoming the thaw between India and Pakistan stating that the two countries must move beyond secret talks and join the table for open talks to resolve all issues including Kashmir.

Talking to reporters on the sidelines of a party function at party office in South Kashmir’s Pulwama district, Omar said that the NC has always welcomed peace overtures between India and Pakistan.

“We have always been stating that war is no solution and all issues can be resolved through dialogue. I don’t want to go into how these two countries are coming closer to each other.

What I want to say is that India and Pakistani leadership must move beyond secret talks and join the table for an open dialogue,” Omar said, adding that “dialogue is the only way to resolve issues including Kashmir. There are lot of issues between India and Pakistan.”

About the ED questioning of PDP chief Mehbooba Mufti, Omar said that from Tamil Nadu to J&K, Mehbooba is not the only leader who was summoned.

“Wherever leaders are being summoned, the leaders are facing it in the form of questioning etc. We have observed in the past eight years, opposing the Centre’s policies is being summoned by the agencies. We are ready to face this too,” he said.

Omar also said  National Conference is party of sacrifices and it’s workers have proved it braving even the toughest changes in the past.

He said,’the flag of National Conference is red because of the sacrifices if it’s workers’, adding that “National Conference has represented the sentiments and aspirations of the people of Jammu and kashmir in past and will continue to do so in future also”.

Referring to the August 5, 2019, he said the measures were undertaken at the pretext of ushering in development in Jammu and Kashmir.

He said the state was downgraded, divided and sheared off its constitutional status in the nonappearance of its elected leaders, who he said were caged for months altogether both at in-house and out-house confinement centers to ensure that the center had a free walk in bulldozing the state’s political identity and other constitutional safeguards.

“The measures were undertaken at the pretext of flooding the region with investment, bringing about more employment and development. But so far the promised flood of investment, development, infra-up gradation is nowhere visible on ground. What is it that has been achieved by GOI? Contrary to it the entire region has been put on the path of terminal alienation and dismemberment. The striking feature of the Kashmir post August 5, 2019 has been marked by administrative inertia, development deficit, crumbling economy, and failure of the administration even to ensure basic amenities like water, electricity and connectivity to people. All the promises which were made to people in the run up for unilateral measures of August 5 have deflated. The government has lost its plot. The only thing that the GoI has been able to achieve is to put the entire region on the path of terminal alienation,” he added.

On the front of peacemaking, he said that it was told that peace will prevail in the region post nullification of the state’s constitutional status. But the prevailing situation doesn’t attest to what was being claimed, he said. He said that asking people to remove Pherans at government functions explains it all. It has never been the case, even in the height of turmoil nobody was ever asked to remove their Pherans at government functions. Having such a measure in place now reveals how better the security situation has become. It took the party five days to get permission for today’s public gathering. It has become a norm, never has this been the case that political gathering and public meets had to wait for such a long time to get permission and other security clearances,” he said.

Omar said after August 5, 2019 the people of Jammu and Kashmir have been put on the path of disenfranchisement. The measures like sidelining locals from sand extraction give a picture of discrimination and mortification that the people of J&K are facing