‘After elections we will be getting more security personnel to fill the gaps’: Police 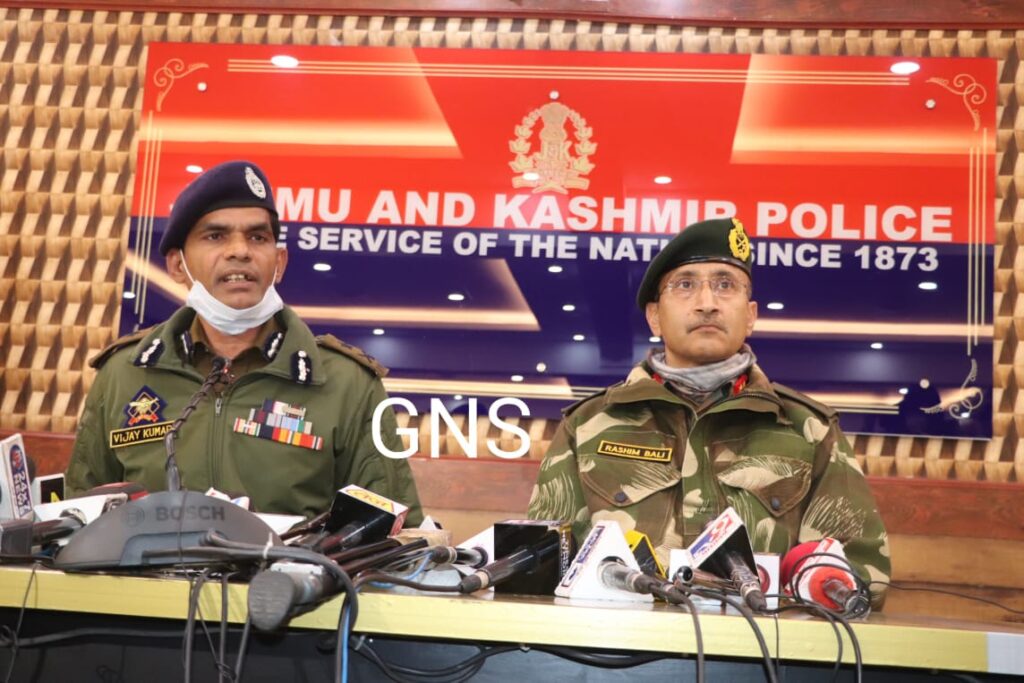 Srinagar, March 22: Inspector General of Police Vijay Kumar on Monday termed stone pelting more serious problem than the militancy and reiterated to book those indulging in such incidents under Public Safety Act (PSA).

Addressing a presser along with a senior army officer here following a gunfight at Manihal area of South Kashmir’s Shopian district, the top police officer said that four local militants were killed as they refused the offer of surrender.

“We also brought wife of one of the militant to persuade him but the militants opened fire from inside the house,” he said, adding, “All of them were categorized militants and in our list figure as LeT militants even though they claim to be members of so-called Lashker-e-Mustafa. Three pistols and one AK were found.”

He identified the slain militants as “Rayees Ahmad Bhat who was active from October last year,

He said so far nine encounters have taken place in Kashmir Valley with one happening in north kashmir and eight in south Kashmir.

“19 (militants) were killed and nine of them belonged to Shopian district. Two of the militants killed include two top commanders—Gani Khowaja and Sajjad Afghani.”

He said 18 youth joined the militant ranks recently and five of them have been killed while three others have been arrested. “Others are active in the field. We are in touch with their families and some are pipeline to return,” he said.

He said that also seven other youth have returned to mainstream with the help of their respective families.

“Till 2 am we were hoping that there would be surrender (in Shopian),” he said and reiterated SOP announced in January this year by virtue of which the top police officer said that focus is on the surrender. “Our focus is on surrender of the locals during or before the encounter,” he said.

He also issued an appeal to youth surrender either before or during encounter.

Kumar also said that so far no civilian has been killed. He said three policemen and a soldier were killed in separate militancy related incidents this year so far.

“Yesterday one soldier was injured (in Shopian and he is stable,” he said.

The top police officer said that Pakistan was continuously trying through social media to radicalize the youth. “Drugs are coming from Pakistan. Request parents to be vigilant and if someone is using drugs, get help from police hospital.”

He said security establishment was fully prepared for summer.

“We are increasing nakas and shifting camps. After elections we will be getting more security personnel and we will plug gaps wherever required.” He said there would be safe and incident-free Amarnath yatra which starts from June this year.

Regarding law and order around gunfights site, he said, “When firing starts, we evacuate people and some people, miscreants among them resort to stone pelting.

People from other village don’t come. We continue to identify them and some are booked under PSA and will continue to so in future,” he said.

He said such incidents were under control and urged media not to “spread false narrative that stone pelting is increasing so that environment gets vitiated.”

To a question if there was contradiction in police’s claim that a youth who takes extreme step to take arms is allowed to surrender while on the other side a youth is booked under PSA for protesting, the IGP said: “If there is militant attack, schools and colleges do not get closed. Economic activities are not hampered nor do yatra stops or tourists stop coming.”

However, he added when there is “law and order problem”, “Yatra declines, tourist fear to come while schools and colleges get shut. Stone pelting is a larger issue as society gets involved and as such we take stone pelting more seriously.”

“Militant does not make much difference. We don’t want schools and colleges to be shut and tourists stop coming. Law and order is a much bigger problem for me,” he said.

He said that security establishment wants to ensure that schools and colleges remain open and that there is increased tourist footfall “so that people earn their livelihood and there is peace.”

Responding to a question, he said it was not prudent to believe that militants will not carry attacks. “We are prepaid,” he said.

Responding to a question regarding narcotics and no palpable change on the ground despite claims of large scale recovery every day, he said: “When the disease is big, treatment takes time. It comes through Pakistan, Nepal and through drones.” We don’t want you (media persons) to be informers but whenever you get any such details, share it we will act on it.” gns