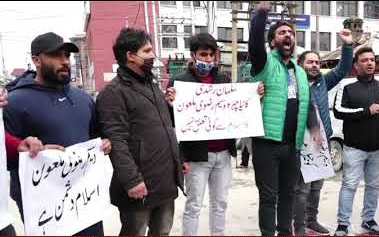 Srinagar, Mar 13: Protests against blasphemy remarks by a former Shia Wakf Board Chairman, Waseem Rizvi were held on Saturday, with people demanding exemplary punishment to Rizvi, for hurting religious sentiments of billions of Muslims across the globe.

A religious body, Rehmatan-lil-Alameen Foundation, staged a protest against the Shia leader’s controversial remarks against the holy book of Muslims.

Rizvi has filed a Public Interest Litigation (PIL) in the Supreme Court of India seeking deletion of 26 verses of the holy Quran, who he alleged incites terrorism and promote violence among Muslims.

Members of religious bodies holding placards reading “hang evil Rizvi, dismiss petition” assembled at Press Enclave to lodge their protest against Rizvi’s move to challenge the authenticity of the holy book of Muslims. They were also chanting slogans against the former UP Shia Wakf Board Chairman.

“We have assembled here to register our protest against accursed (Maloon) Rizvi, who wounded the religious sentiments of billions of Muslims across the world. We want the government to act tough against such radical elements, who always stoke controversy through his blasphemy acts,” they said.

They appealed to the Supreme Court of India to dismiss the plea seeking amendments in the holy Quran whose authenticity, they said, has never been challenged since the past 1400 years.

The protesters said Rizvi’s aim to file PIL in the top court was to incite communal disharmony among several sects of Muslims.

They also claimed that such moves have potential to create discord among the communities; however, they appealed Muslims to exhibit patience to make people like Rizvi fail in their nefarious designs.

“We appeal the every sect of Muslims to be united and do not sway into emotions, we also appeal the government to arrest Rizvi and punish him for attempting to create communal discord,” they added. kno