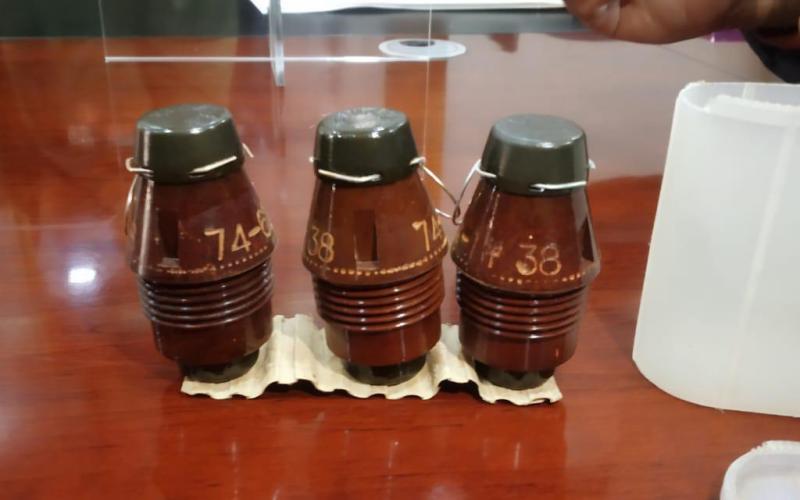 Baramulla, Jan 01: After claiming the arrest of TRF’s Over Ground Worker (OGW) in north Kashmir’s Baramulla district, Jammu and Kashmir police on Friday said that a first of its kind grenade was recovered from his possession.

In the morning, Baramulla police said that one of the most wanted OGW was arrested along with three Chinese grenades.

Addressing a news conference, Senior Superintendent Of Police (SSP), Baramulla, Abdul Qayoom, said that “We have arrested a militant associate (Asif Gull) last year on 29 December who was under the police radar for the past eight months since he was involved in a grenade attack in Baramulla in August last year that claimed the lives of forces personnel besides having over two dozen cases registered against him.”

He said that during the investigation, the most wanted and longest surviving militant (Referring to Hyder and associates) who were killed in an encounter last year were in touch.

“Hyder and another associate were in touch with Asif Gull and it repeatedly surfaced he was involved in a grenade attack but had gone into hiding since then to undertake some tasks,” he said.

In the preliminary investigation, it surfaced that Asif had even managed to move outside J&K, he said.

Terming the arrest as an achievement for security forces and police, the SSP said that the apprehended Asif Gull is involved in at least 29 FIRs in Baramulla, four at Sopore, and also was booked under four PSAs.

“Abid, his friend, a student enrolled at Jammu College went to Pakistan via Wagah Border by availing a Visa and is presently running TRF outfit as top commander based in Pakistan and Asif was tasked to recruit youth into the outfit (TRF)”, he said.

“First of its kind grenades have been recovered from Asif. In Jammu and Kashmir, no such recovery has been made so far by the security forces and all were kept within a bag full of charcoal covered with a plastic bottle to escape from the joint Naka,” SSP said.

The SSP said that in the preliminary investigation, it also surfaced that apprehended Asif has done huge extortion in the name of Lashkar and TRF but none of the individuals has so far approached the police with a complaint against him.

“With his arrest, we are sure that almost eight youth have been saved from joining the TRF outfit and his stay in Srinagar is also being investigated and it’ll be thoroughly investigated what he was asked to execute there,” he said.

To a question about the purpose of his visit to outside J&K, the SSP said that it’s a preliminary investigation and the movement traced has revealed his presence outside J&K as well but the investigation is still underway and all the security agencies are involved in the questioning.

“The questioning by the joint security agencies will reveal the purpose of his visit to outside J&K but the observations reveal that he was tasked for some militancy-related activities there,” he said.

The SSP also said that Asif Gull was recently tasked to kill a Councillor who won the elections held recently. “The Councillor has been informed about the intentions of militants.