‘For 73 years we have been saying that the land where Mukherjee martyred, that land of Kashmir is ours’: BJP 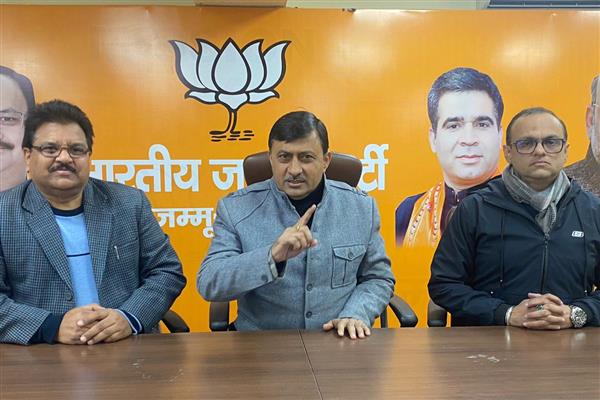 Srinagar December 29: Bhartiya Janta Party (BJP) on Tuesday termed the oath ceremony of elected District Development Council (DDC) members as the dawn of a ‘New Era’ in Jammu and Kashmir and asserted that Kashmir echoed with the slogans of ‘Vanda Matram’ and ‘Bharat Mata Ki Jai’ during the oath of BJP’s elected DDC members from the valley.

Addressing a press conference in the party headquarters, BJP general secretary and in-charge for Kashmir Vibodh Gupta replied to Mehbooba’s ‘referendum’ remark and said that even though we consider DDC poll as refrendum one can easily conclude that the people have voted for Modi’s vision, in favour of abrogation of Article 370 and 35A and against Gupkar gang as Bhartiya Janta Party emerges as the single largest party in the Union Territory . He was accompanied by Kul Bushan Mohtra and Parneesh Mahajan during the press conference.

“National Conference, PDP and Congress candidates, especially in Jammu region, avoided pictures of Rahul Gandhi, Farooq Abdullah and Mehbooba on their campaign posters and tried to lure voter through personal vows and whispering campaign that they are also Modi followers”, Vibodh said.

Vibodh strongly asserted that Gupkar Gang will fail to elect even a single Chairman across all districts of J&K and asked them to accept the verdict of people.

He further accused that the previous regimes of NC, PDP and Congress governments deceived people and never allowed democracy to flourish in the UT. They blocked the Panchayati Raj and Municipality institutions and never allowed decentralization of power which is the basic tenant of Indian Democracy, he added.

Speaking on the oath ceremony of DDC members from Kashmir Vibodh said that the valley echoed with the slogan of Bharat Mata Ki Jai and Vanda Matram. He said that in 1953 Shyama Prasad Mukherjee sowed seeds of ‘complete democracy’ and ‘integrity of the valley with the nation’ which under the leadership of Narendra Modi ripened into a fruit-bearing tree. He said, “For 73 years we have been saying that the land where Mukherjee martyred, that land of Kashmir is ours. Today, Modi ji has given life to that slogan and made Kashmir an integral part of India.”