BJP, its Team-B up to dangerous experiments in Kashmir: NC 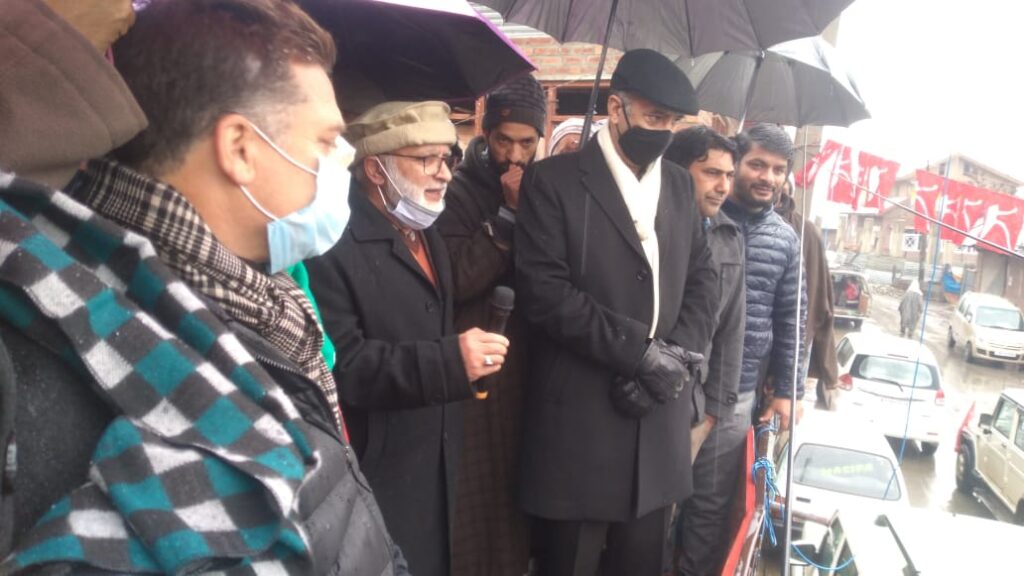 Srinagar, Dec 08: National Conference on Tuesday said BJP and its Team-B does not stand a chance in the ongoing DDC elections, saying the people are all set to unpack hegemony of forces inimical to the unique identity of J&K.

Party’s General Secretary Ali Muhammad Sagar and Provincial President Nasir Aslam Wani as per a statement today addressed people during a strong show while canvassing for PAGD candidates in District Ganderbal. They were accompanied by Party District President and Former MLA Sheikh Ishfaq Jabbar and various other district functionaries.

The duo along with other party functionaries interacted with the people while making brief stopovers at various other places along their campaign trail and urged the people to support Dr. Farooq Abdullah Led PAGD in the ongoing DDC elections. “Ever since BJP has come to power it has been busy in unpacking the very idea of India, disempowering, dismembering a sole Muslim majority state in India is high on their priority list. The BJP and its Team-B in J&K are hand in glove with each other contriving hard to achieve that end. Their only agenda is to grab the Democratic spaces and use it for continuation of their assault on the identity of the people of J&K. The Muslim majority character of J&K has always been a sore in their eyes. Having an empowered Muslim majority state bothers them. It needs no mention how BJP spitefully dishonored J&K in the parliament by ditching all established constitutional norms and political priority. Now the same BJP, through its Team B of plaint stooges is further trying to make inroads into our social life leaving no chance to dismember us completely,” Sagar said.

“The promises of development which they are selling to you are a fig leaf to hide their real agenda. They have been in power since 2015 and nothing substantial was done by them in terms of developing Kashmir. The only thing they have been able to achieve is to sideline locals from decision making positions. Chopping off our unique status, trimming our territorial integrity, snatching our state flag, and enactment of various land laws inimical to the interests of locals are other striking achievements of theirs. It is comical to see BJPs Team B promising to deliver on development. Such promises are being made to hoodwink people and divert their attention to normalize the blunder BJP committed on 5th of August last year, secondly by occupying democratic spaces, the BJP with the help of its gang of pliant stooges wants to further permeate at grass root level to further disempower us,” he added.

The very astounding fact that BJP and its Team B aren’t acknowledging the ongoing crisis like situation in Kashmir speaks volumes about them, said Party’s Provincial President Nasir Aslam Wani. “BJPs team B is an artificial lab made formulation which like its prototypes cannot withstand the test of democracy. Being on the right side of the line cannot help them in the long run; he said adding that the newly surfaced political group is brimming with armchair politicians devoid of any ideology and public support,” he said.

As part of their vicious programme, BJP is taming democracy, making elections irrelevant by not allowing level playing field to all contesting candidates, he said. “A dangerous experiment is in the works in Kashmir. It has money and craft. What it lacks is the goodwill of people who despite all odds are supporting PAGD led by Dr Sahib. This time people have made it a point to vote and support PAGD candidates only. This time people will vote for their self respect and securing the interests of J&K,” he said.