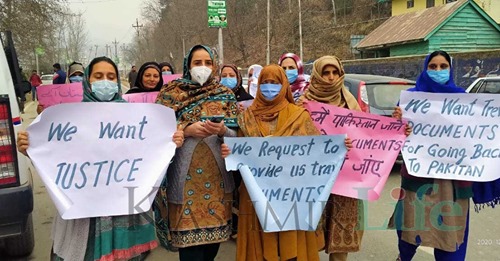 Srinagar, Dec 07: The Pakistani administered Kashmir (PaK) brides Monday staged a protest at in Srinagar and demanded travel documents so that they can travel to other side of Line of Control (LOC) to meet their families.

Nearly 400 women from (PaK) are married to former militants in those side of Kashmir who over the years has held a series of protest demonstrations in different parts of the valley demanding travel documents to meet their family members.

PaK brides alleged that the government has maintained silence over the sufferings of women who arrived in the valley under the then government’s rehabilitation policy—2010— are facing immense hardships with no attention from those at the helm of affairs.

Sairah Javaid, one of the protesters said that the Government of India is not ready to accept them but women among them are allowed to take part in the electoral process and become Sarpanchs and DDC.

“If we aren’t the citizens of this country how come others take part in the elections,” she asked.

Sairah said that, “we fail to understand the policy that government has adopted for us.”

She questioned the UT administration and officers at the helm of affairs that if their lot is legally the citizens of India then they should be allowed to enjoy their fundamental rights under the Constitution of India. And if they’re illegal here they must be allowed to go back to Pakistan.

“We are feeling caged here and even after several protests the government has maintained silence over the issue,” she said.

Sairah further said that the grim situation has affected their children and the government at the earliest must come out over the matter and either deport or accept us as the citizens of India.

In tears, another, Pakistani woman married to a former militant married in Srinagar said that, “I failed to attend the funeral of any relative who has died over the last couple of years including a brother, maternal aunt, and uncle, and others.”

“My mother died some 20 days back and I failed even to have her last glimpse and her death has totally left me all shattered,” she said.