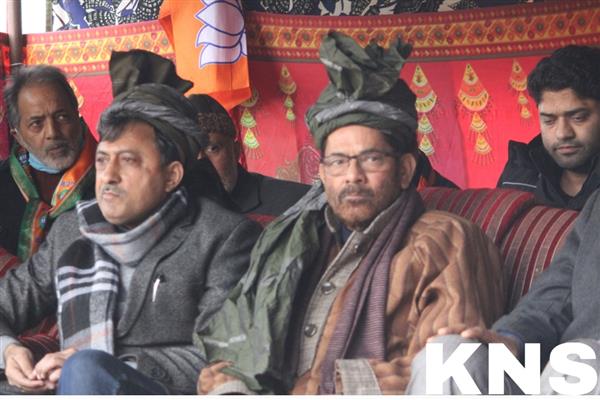 Naqvi while addressing BJP workers in north Kashmir’s Kupwara district hit out at dynastic politics without naming National Conference and People’s Democratic Party, saying their self-interested politics from last seven decades kept people away mainstream and with the result people were deprived from political rights.

“PAGD is a well-though out conspiracy against people of Jammu and Kashmir”, Naqvi asserted.

Taking dig at signatories of PAGD, the Union Minister said that after understood the circumstances, those parties who earlier threatened New Delhi of staying away from electoral politics till “this and this” is not restored, are now participating in polls.

Terming the decisions taken on August 5, 2019 as beneficial to J&K, the Union Minister said that what BJP did on August last cannot be reversed now.

Talking about DDC elections that are scheduled to be held from November 28 to December 22 across Jammu and Kashmir, Naqvi said that people’s participation in elections will send a clear message that people of J&K want peace, prosperity, development and dignified life.

He said that with the Article 370 there were hundreds of rules inapplicable in J&K. “Around 890 rules were not applicable in J&K including no reservation for Gujjars and Bakerwals and job reservations as well, but the decisions taken on August last year ensured the applicability of these laws in J&K”, Naqvi said.

While addressing party workers ahead of DDC polls at Tourist Reception Centre in Handwara, Naqvi assured that all problems being faced by people at grass root level will be addressed in times to come.

He at the occasion also assured that security cover to contesting candidates will be provided soon. “There are many who are enjoying security cover but also those who have not given so for , will also be included”, he said.
When asked about the eviction of Gujjars and Bakerwalls from forest lands in J&K, Naqvi said that none can be allowed to breach forest land laws. “No one will force Gujjars, Bakerwals and others to leave the forests. Whosoever is inhabitant of forests will remain there and those breaching forest land laws would be dealt strictly”, the Union Minister said. The minority affairs Union Minister was accompanied by BJP spokesperson, Dr Daraksha Indrabi, Altaf Thakur, BJP media incharge Manzoor Ah senior leader Gh Mohd Mir, and several other leaders. (KNS)