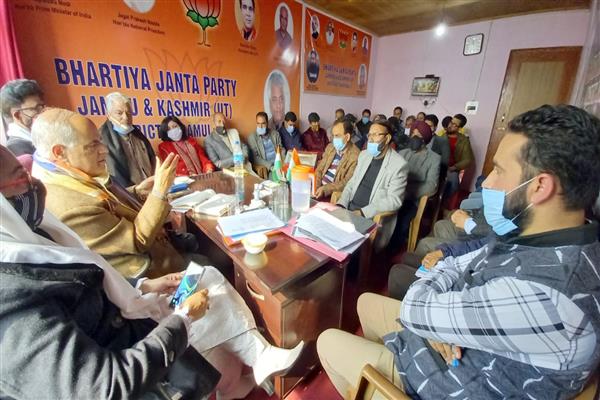 In his three day tour to Kashmir, Koul visited Baramulla, Bandipora and Kupwara districts and reviewed the preparations regarding the upcoming DDC polls.

He said BJP worked tirelessly during the Covid19 and said same worked will be shown to people to gain their support during DDC elections.

“We have its results in Bihar elections and people in Jammu and Kashmir should also support the development of peace and progress,” he said.

While referring to Gupkar alliance leaders, Koul said despite negative propaganda by Gupkar gang leaders against BJP makes them stronger and positive.

“We are hopeful that people will support the change. They will say no to traditional and family politics,” he said.

Koul said initially they are the same people who were opposing the DDC elections and now they are day dreams to gain support in the name of restoration of Article 370 and other issues.

“Internally there is big confusion among the alliance leaders as each party has announced its candidates against each other. They are frustrated now and people will also reject their tactics,” he said.

Urging party candidates, Koul said they should left no stone unturned for peace and development in the region. “Our candidates should never give them another chance of looting Jammu and Kashmir.