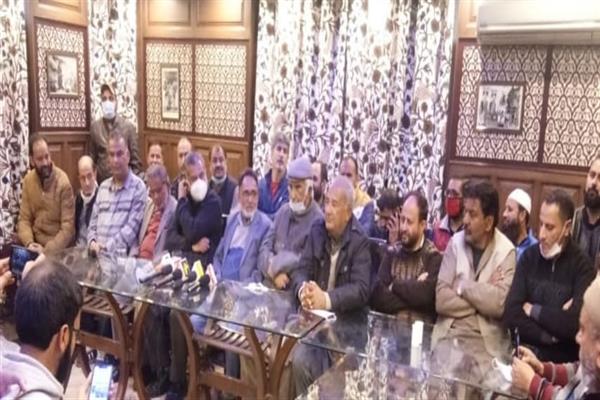 Addressing press conference, Chairman Kashmir Economic Alliance Muhammad Yousuf Chapri said that the mission of uniting the business leadership which his party has undertaken would continue. He said that the traders had suffered a lot during the last five years.

Chapri said that the policy of divisive bidding and division of trade associations has discouraged traders as well as commercial interests. He said that the initiative to bring traders under one roof was a step in the right direction.

Announcing his support for the alliance, Mohammad Sadiq Baqal, president of a faction of the Kashmir Traders and Manufacturers Federation, said he was convinced that unity in trade association’s need of time. He, however, advised the business leadership to abandon their ego and represent the Traders with sincerity.

“The legitimate leadership of the trade organization may emerge, if leadership will create a democratic atmosphere” Baqal said.

Mohammad Rajab Kachai, Acting President of KTMF other faction of KTMF, said that the overall solution to the problems of traders lies in unity and harmony. He said that due to lack of democratic spirit in the leadership, the division of Trade orgonization is happening every now and then.

Shahar Khas Traders Coordination Committee, chairman Distributing Nazir Ahmad Shah, also agreed with the proposal and unity of traders under one platform .He said in that only by uniting the problems of traders be solved.

At the occasion Chairman Kashmir Traders United Forum Farooq Ahmed Dar said that a series of meetings with more trade leaders and representatives of associations would be started in the coming days, after which the districts would also be visited. He said that the traders had suffered irreparable losses. However, the situation created after August 5 and the Covid situation resulted in a loss of about Rs 50,000 crore.

He assured the businessmen that the initiative he had initiated would be continued at all times for the betterment of trade and business.He said that he was neither a presidential candidate nor was he involved in the race. In a press conference, he announced that the KTUF would be dissolved after the alliance.