There is a ‘massive’ misuse and misappropriation of donations in Wafq, says BJP leader Darkshan Andrabi 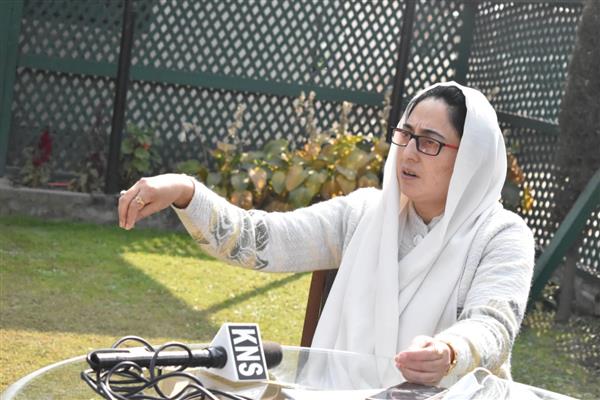 Andrabi said that reports about the brazen misappropriation of donations in Waqf led Shrines is not ‘unfounded’.

“Those who have taken the reins of Waqf in Kashmir valley have looted this sacred institution for personal benefits”, she said.

“In Jammu region there are less number of Muslim Shrines as compare to Kashmir but unfortunately there is a massive misuse of donations that devotees contributing to holy Shrines in valley”, she added.

She said that “since I took the charge of Waqf in J&K, I visited several Shrines and inspected affairs related to it but what I observed the elements who have occupied chairs got frustrated from my visit and inspection. I found no accountability there. They afraid of my visits and questions I raked up”.

Andrabi said they are somehow managing to hoodwink people in this world but what about hereafter where these people have to stick before Almighty Allah.

When asked why Waqf has failed to raise a structure like hospital or university from its countless donations? She said that properties like VaishnoDevi Trust and others are directly under the control of J&K Government where there are least chances of corruption and loot, however when it comes to Waqf there are elements who have burgled this institution for personal benefits.

“We are getting countless donations from devotees. Where these are going? We didn’t raise any structure, neither hospital nor university. We are not marrying orphan girls from these donations. People of Kashmir should awaken at this juncture to stop this loot”, Andrabi said.

Taking a dig to those who cheat people on the name of faith, she said those taken windows in sacred Shrines are endeavoring to snatch even clothes of devotees if not argued boldly.

“Not only donations these people are taken away, they are also trying to snatch clothes of devotees. If not argued boldly at the occasion, one has to come outside naked”, she added.

Terming “accountability” and “transparency” imperative to clean the system within the Waqf, Andrabi said Waqf employees are first target who have to explain how they got employment into the Waqf.

“These people have no faith on ‘Awliyaye-e-Deen’ as they are just earning their livelihood in these sacred Shrines. Their appointments into the Waqf need to be investigated”, Dr Andrabi said. (KNS)