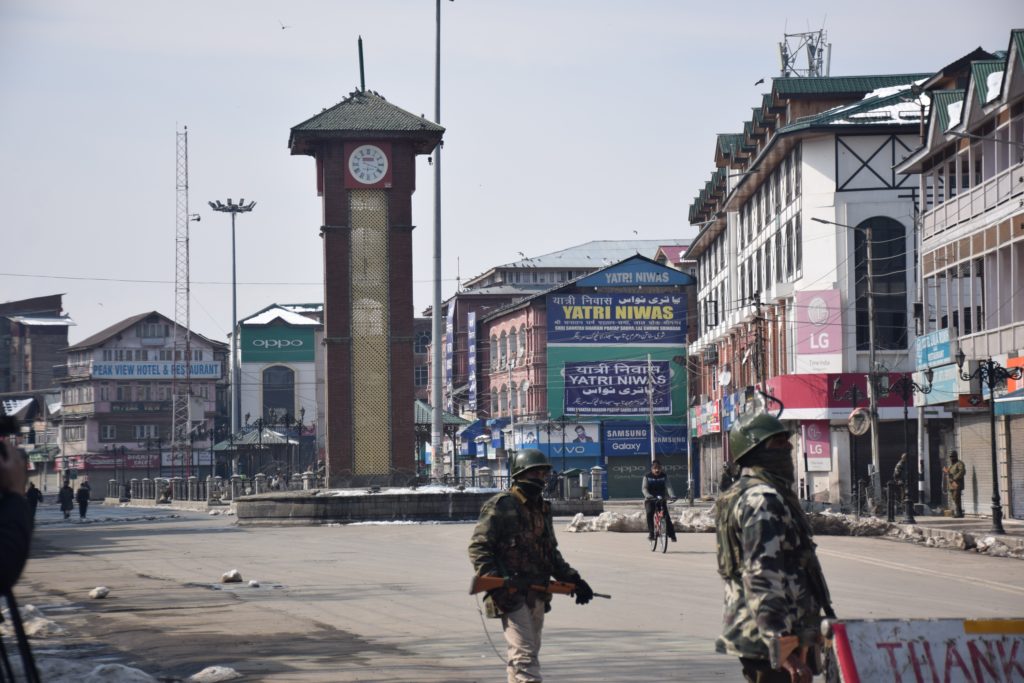 The shutdown was called by APHC Hurriyat Conference in response to a notification issued by the central government on enforcement of new land laws after repealing as many as 13 old laws .

According to reports shops, petrol pumps and other business establishments and private offices were shut in Srinagar, the summer capital of Jammu and Kashmir, the witnesses said.

Police and paramilitaries were deployed in strength in Srinagar city to avoid any untoward accident.

The Hurriyat had issued the call for the shutdown on Wednesday, a day after the Centre notified the new land laws. One after the other laws are being invented and amended by New Delhi and “forcibly thrust upon” the people of Jammu and Kashmir, the Hurriyat said.

“Rather than pursue a peaceful resolution of the Jammu and Kashmir issue involving millions of humans living in the uncertainty of a conflict as per their will and to ensure peace in the region, all attempts are being made to undermine that possibility by the Government of India and instead, a policy of permanent demographic change is aggressively being pushed – to snatch our land, destroy our identity and turn us into a minority in our own land,” it said in a statement.

“People of J&K completely reject and strongly condemn these appalling imperial measures… To register their strong resentment against these anti-JK people laws, and demanding their immediate withdrawal, people will peacefully observe a shutdown on Saturday,” it said.

In a gazette notification issued on Tuesday, the Ministry of Home Affairs made several changes to the land laws, including one that allows the use of agricultural land for setting up facilities of public purpose.

The most important amendment has been made in the Jammu and Kashmir Development Act that deals with disposal of land with the Centre omitting the phrase “permanent resident of the state” from Section 17 of the law.

This paves the way for people from outside Jammu and Kashmir to buy land in Jammu & Kashmir, over a year after the abrogation of Articles 370 and 35A of the Constitution.

The land laws Introduced by center has received sharp criticism in J&K with protests happening at many places by mainstream parties.(KNS)