7 killed, 110 injured in blast at madressah in Peshawar’s Dir Colony 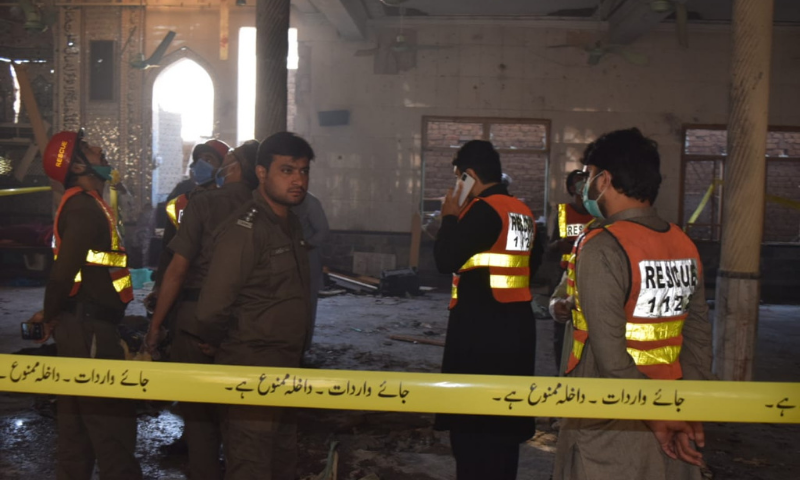 Peshawar, OCtober 27: At least seven people were killed and more than 110 injured in an explosion on Tuesday morning at the Jamia Zuberia madressah in Peshawar’s Dir Colony, Dawn news reported

According to Lady Reading Hospital spokesperson Mohammad Asim, four of the deceased were students between the ages of 20 to 25.

“The blast took place in the madressah during a Quran class. Someone took a bag inside the seminary,” Waqar Azim, a senior police official, told AFP.

Mohammad Ali Gandapur, another senior police official, confirmed the details. He said two teachers were among the wounded.

Senior Superintendent of Police (Operations) Mansoor Aman confirmed the explosion, saying that initial reports suggest an improvised explosive device (IED) was used in the explosion. “Five kgs of explosives were used in the blast.”

The area has been cordoned off and police teams are collecting evidence, he added.

No group has claimed responsibility for the attack.

The LRH spokesperson said that seven dead bodies and 70 injured have been brought to the facility.

He stated that the injured were being provided with immediate medical attention and the hospital’s director was present at the emergency ward. He added that an emergency had also been declared at the medical facility.

Khyber Pakhtunkhwa Health Minister Taimur Saleem Jhagra visited the site of the blast. Speaking to reporters, he said that the focus was on providing the injured the best possible treatment to increase their chances of recovery.

Prime Minister Imran Khan “strongly condemned” the blast, according to a statement from the Prime Minister’s Office. He expressed sadness over the lives lost in the explosion and prayed for the quick recovery of the injured. (Dawn)