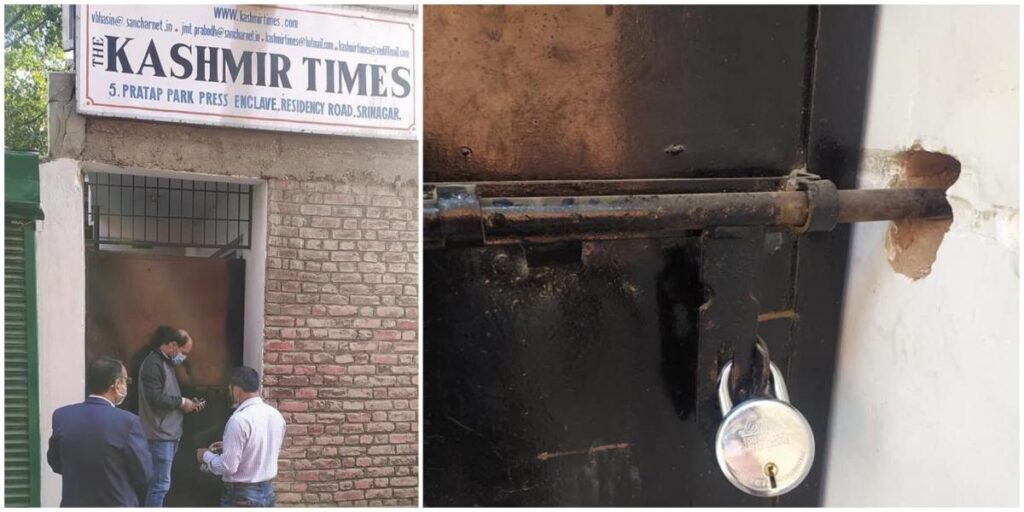 Srinagar, Oct 20: Kashmir Editors Guild (KEG) on Tuesday regretted the sealing of the Kashmir Times office by the Estates Department. The quarter that was allotted to the newspaper was the office of the Jammu newspaper’s Kashmir bureau since the early 1990s.

As per a statement, the Guild said that the government should have followed the due process of law.

“In recent days, this is the second instance in which a media organization was arbitrarily ousted from duly allotted premises. Earlier, a local news gathering agency, Kashmir News Service (KNS) had also its office sealed,” the statement said.

The Guild sees the sealing as the continuation of an abnormality being enforced on Kashmir media for a long time especially since 2010.

“In the last 10 years, the successive regimes have created a very unpleasant history as far as operations of the media in Kashmir is concerned. Preventing circulation of newspapers, blacklisting the newspapers from getting government advertisements in Srinagar and Delhi, and interrupting negatively in the routine operations have adversely impacted the media. These are in addition to the issues that reporters face on a daily basis while gathering information,” the guild said.

“In the last few years, the administration has gone for an upgrade in its policy towards the media as a result of which the arbitrary measures are being taken now. Though the entire media fraternity has been insisting that the media policy announced by the Jammu and Kashmir administration early this year is neither jellying with the spirit of democracy nor the basics of information management in the twenty-first century, the authorities have skipped responding to the suggestion,” the statement said.

The Guild called upon the administration to unseal the premises from which Kashmir Times and KNS offices were operating from till the due process of law comes out with a solution.

It also called upon the authorities to revisit the Media Policy and make it a forward-looking professional document rather than early twentieth century dictate.

“The Guild takes this opportunity to request the stakeholders in media and society to avoid resorting to the vilification of the Kashmir media because it helps nobody to prosper,” the statement added.