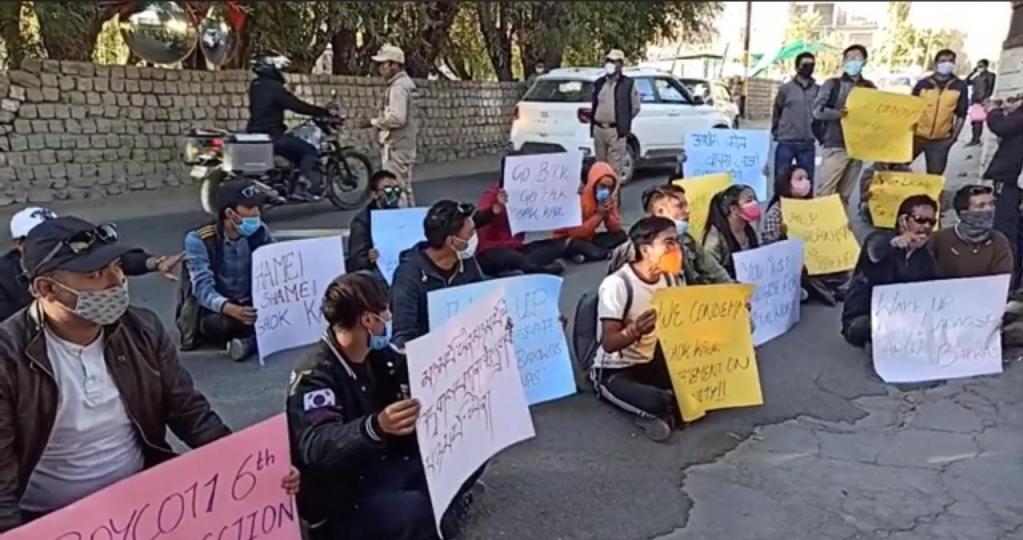 Ladakh, Sep 23: A day after the maiden poll boycott call by combined parties in newly created Ladakh union territory, the political leaders here Wednesday said that the last year’s August 05 decision is still bothering the people and council without legislature is meaningless while people are highly worried about security.

The political leaders believe that the last year’s August 05 decision was taken without the consent of people and the central government created a separate union territory from the erstwhile state of Jammu and Kashmir but failed to give the legislative powers to the council and constitutional safeguard to the region leaving people in a deep distress.

Former minister and Ex BJP chief Ladakh Chering Dorjey who is also part of the apex body said it is the last year’s August 05 decision still haunts the people of the region and demand for 6th schedule is a serious concern.

He said that the poll boycott is a big and historic decision. “If the government doesn’t give constitutional safeguard under the 6th schedule to the entire region then there is no fun of making it as a separate union territory and people must be given constitutional security only because without that the UT status is meaningless”, Dorjey said.

The poll boycott is supported by all political, religious parties, student’s bodies and all panchs and sarpanchs including the common people and it marks a history of maiden mass boycotts in the entire region, he said.

“It is the last year’s August 05 decision that still bothers the people of Ladakh since during the undivided time provisions under article 35-A ensured the protection of the entire region”, he said. “Unless the safeguard under 6th schedule is given, people will continue to feel insecure.”

Rigzin Spalbar, region’s senior political leader and former CEC said that the boycott call is important and it sends a clear message, commitment and evolvement because if elections are contested then everything is normal which actually isn’t people are concerned and highly worries about the constitutional safeguard and protection.

The council made under the 6th schedule has both executive and legislative powers and the council without that is meaningless, he said.

“The election boycott won’t favor anyone and it is useless to take part in the electoral process even  the nominations won’t be filed”, he said. “No one can run Ladakh on a remote control device and congress is against the division (Bifurcation) but leaders here have demanded it for so long now including the BJP since all belong to this region only and are tribals of this land and are ladakhis”, he said.

The former CEC said that when it finally comes to survival and existence people very well know what to do.

Rinchen Namgyal, official spokesman for Aam Aadmi Party (AAP), told KNO that the poll boycott decision is important and is in the larger interest of ladakh and our council is without a legislator in this condition we have to jointly demand for the constitutional safeguard under 6th schedule.

He said I still fail to understand as to why the people of Jammu and Kashmir accept the new domicile law.

“People in Ladakh demanded union territory status for the last three decades but with full legislator powers and proper security to it” he said. “No one knew about the last year august 05 decision and the government did not consult anyone that time  especially J&K shouldn’t have accepted the new domicile law and ladakh in no way is in a condition to accept it.”

In absence of constitutional safeguard the entire region will immensely and ladakh is a victim of negligence of government and there seems no plan from the government to elevate the region as a state or a UT with a full-fledged legislator, Rinchen Namgyal said.