Hizb trying to re-establish its base in north Kashmir: DIG North Kashmir 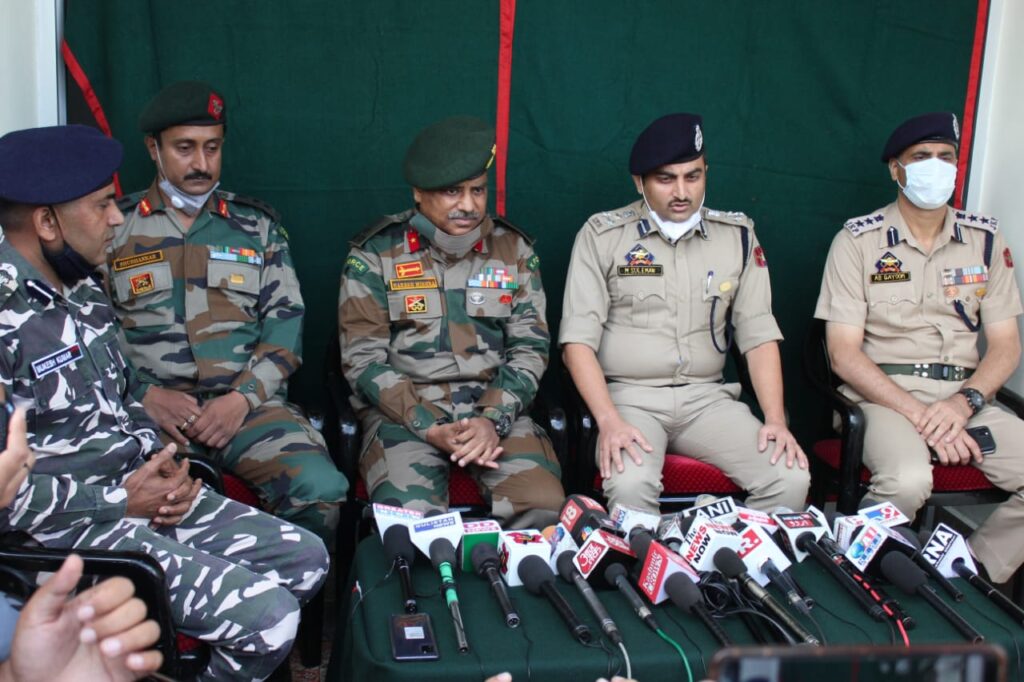 Pattan, Sep 05: The army and police officials Saturday said that it seems that Hizb is trying to ‘re-establish its base in north Kashmir’ but alert forces are ready to foil such moves.

They also said that the three slain militants killed in Yeddipora, Pattan in north Kashmir’s Baramulla district yesterday were affiliated with Hizbul Mujahideen and the it was almost after four years that Hizb militants were killed in the district. They said

Addressing a joint press conference at Hyderbeig, Pattan, Deputy Inspector General of Police North Kashmir range, Muhammad Sulaiman Choudhary said that acting on a tip off, joint teams of police, army and CRPF laid a siege at around 5 am at Yeddipora, Pattan.

“The militants were hiding in a house. There were 12 civilians including children who were held hostage by the militants,” the DIG north Kashmir.

He said an army Major and two Special Operation Group(SOG) men were injured in the initial exchange of fire but all are stable and out of danger.

“Two of the slain militants were locals and have been identified as Shafkat Ali Khan of Rawatpora, Delina and Hanan Bilal Sofi of old town Baramulla. The identity of third one is being ascertained,” said DIG Sulaiman Choudhary.

Asked the affiliation of the group, the DIG north Kashmir said that the slain belonged to the Hizbul Mujahideen outfit.

Replying to a query it was almost after four years that Hizb militants were killed north Kashmir, the DIG admitted saying that it was after a long gap as in the past man years militants from Lashkar and Jaish were killed in the northern districts including the recent encounters of Handwara, and Kreeri areas of the district.

“It seems that Hizb is trying to re-establish its base in north Kashmir. We are alert and ready to foil all the plans of Hizb that are aimed at its revival in north Kashmir,” the DIG said.

Speaking on the occasion, commander 20 Sector RR Brigadier N K Mishra said that all the three militants were given an opportunity to surrender but they refused.

“It was a day-long operation that lasted for 12 hours. Three to four houses were involved. While making the surrender offer to militants, one of the hiding militants fired one bullet that hit our Major Rohit. He is stable,” Mishra said.

He said that the operation was a deliberate one as first priority was given to evacuate 12 civilians . “This group was active since long time and was involved in attacks on forces,” the army officer said.

Replying to a query, the army officer said that local militant recruitment has gone down in north Kashmir.

“In 2018, 38 militants joined militancy, in 2018 the number was 19 and this year the number is very less,” he said, adding that whenever any local boy joins militancy, the army approaches his parents and relatives and puts in best to bring the person back. “We have succeeded on this front,” he said. “If youth of this area would join mainstream, this area (north Kashmir) would be the country’s best area on the developmental front.”

About the query on alleged misbehavior and thrashing of journalists near the encounter site yesterday, the DIG and Brigadier appealed to scribes to refrain from going closer to the gunfight sight stating that stray bullets can hit anyone. “I will look into the issue as to what happened yesterday,” the DIG north Kashmir said and urged media men to maintain a distance from encounter site while covering the encounters—(KNO)