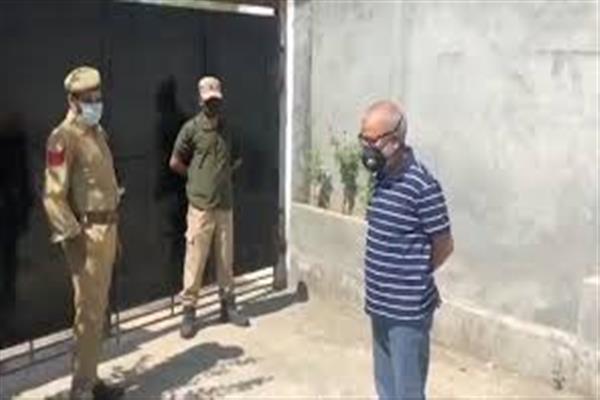 Srinagar, Sept 03: Authorities on Thursday foiled the meeting of Peoples Democratic Party (PDP) leadership in Srinagar and disallowed senior leaders of the party to step outside from their residences.

Sources said that authorities imposed restrictions on their maiden meeting following the abrogation of Article 370 in August last year.

Sources said that meeting was scheduled to held at 11:00 am sharp on Thursday however those who were invited to participate in the meeting were not allowed to step outside their residences.

According to PDP spokesman, the meeting was called to discuss prevalent political situation and other pre-requisite issues including prolonged incarceration of PDP chief Mehbooba Mufti who is detained under draconian law Public Safety Act.

Spokesperson said, several invitees of the meeting were prevented by the police sleuths from leaving their residences.

Meanwhile senior PDP leader and former education minister Nayeem Akhtar shared a video on social networking sites in which he was seen stopping by police cops inside the premises of his residence.

“Despite being free on paper and in Govt. submissions in HC and SC, PDP Leadership continues to be under illegal detention, without any official orders. Video from today – I wasn’t allowed to attend the PDP meeting nor were any of my colleagues,” tweeted Akhter.

Similarly another video was shared on the official Twitter account of PDP chief Mehbooba Mufti in which another former minister, Ghulam Nabi Lone Hanjura was stopped by the police.

“Shameful that J&K admin along with police physically prevented PDP leaders from leaving their homes in Srinagar today. They shamelessly lie to courts that these people are free to move & then have the audacity to detain them illegally at home”, reads the tweet.

Notably PDP leaders on Wednesday said that the party has wrote to Deputy Commissioner Srinagar and has sought permission for participation in the meeting. “The copy of the same has been forwarded to IGP Kashmir, SSP Srinagar, SSP Security and other concerned quarters for seeking permission to take part in the meeting”, party had said. (KNS)