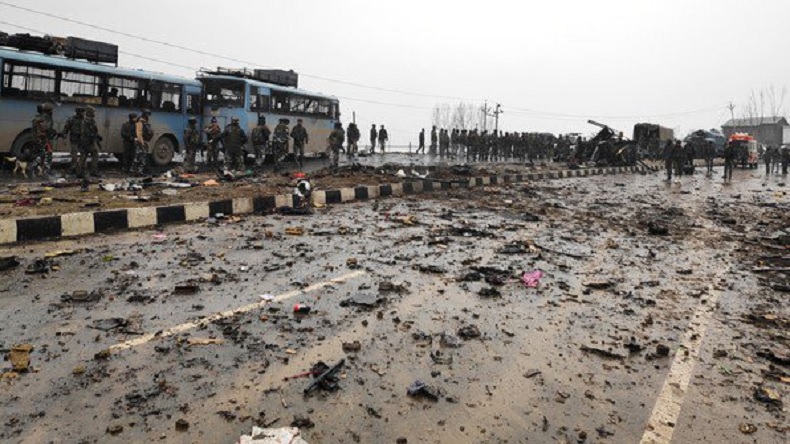 Srinagar, August 25: National Investigating Agency (NIA)  filed 13,800 pages chargesheet against 19 accused persons in NIA Special Court at Jammu in connection with the militant attack on the CRPF convoy that was moving from Jammu towards Srinagar on February 14, 2019 at Lethpura, Pulwama, with an IED-laden vehicle which resulted in killing of 40 CRPF personnel and inflicting grievous injuries to other eight others.

According to the NIA, their investigation has revealed that Pulwama attack was a result of well-planned criminal conspiracy hatched by “Pakistan-based leadership of militant orgnisation Jaish-e-Mohammad. The JeM leaders have been sending their cadres to the militant training camps of Al-Qaida-Taliban-JeM and Haqqani-JeM in Afghanistan for receiving training in explosives and other militant tactics”.

The statement read that the main accused, slain Mohammad Umar Farooq had also visited Afghanistan for explosives training in 2016-17.

“He infiltrated into India through International Border at Jammu-Samba Sector in April, 2018 and took over as Jaish-e-Mohammad Commander of Pulwama,” the statement said..

The NIA statement read that the accused “Shakir Bashir, Insha Jan, Peer Tariq Ahmad Shah and Bilal Ahmad Kuchey provided all logistics and harboured the JeM militants in their houses”.

“From December, 2018 onwards, Shakir Bashir started doing reconnaissance of the movement and deployment of security forces on the Jammu-Srinagar National Highway. Mudasir Ahmad Khan arranged Gelatin sticks and handed them over to Shakir Bashir. RDX was brought by the Pakistani militants who infiltrated into India. Shakir Bashir collected the explosive material i.e. RDX, Gelatin sticks, Aluminium powder and Calcium-Ammonium Nitrate and stocked them at his house for making the IED,” the NIA statement reads.

“In Jan., 2019, Sajjad Ahmad Bhat purchased a Maruti EECO car for the purpose of carrying out the IED attack. The car was kept in the front-yard of Shakir Bashir’s house. Waiz-Ul-Islam ordered 04 kgs of Aluminium powder from his Amazon account on the directions of accused Mohd. Ismail @ Saifullah and gave the same to him”.

Towards the end of January, 2019, the NIA statement reads that “Mohammad Umar Farooq, Sameer Dar and Adil Dar made the propaganda video clip of the suicide attack at Insha Jan’s house which was released immediately after the attack”.

“In the first week of Feb., 2019, Mohd. Umar Farooq, Sameer Ahmad Dar, Adil Ahmad Dar and Shakir Bashir made the IED using RDX, Calcium-Ammonium Nitrate, Gelatin Sticks and Aluminium Powder and assembled it in two containers, one weighing around 160 Kgs and the second one weighing around 40 Kgs. The two IED containers were fitted in Maruti EECO car and were ready by the morning of 6th Feb., 2019. However, because of heavy snowfall, the National Highway got closed for the vehicular movement”.

“The investigation has revealed that the Pakistan-based JeM leadership consisting of Masood Azhar, Rouf Asgar and Ammar Alvi @ Chacha @ Chota Masood were continuously giving directions and guidance to the Pakistani JeM militants (who had infiltrated into India) both before and after the attack”.

According to the NIA the militants had also planned to carry out another suicide attack “which got averted due to Balakot strikes and due to killing of main conspirator Mohd. Umar Farooq by the security forces. Further, due to international pressure, Pakistan lied low”.

“Investigation also revealed a well-crafted mechanism by Pakistani establishment to push militants into the Indian territory from the launch pads located in Shakargarh (Pakistan) opposite Samba-Kathua Sector in Jammu”.

“Lot of digital, forensic, documentary and oral evidence establishing a fool-proof case against the accused for this dastardly and barbaric attack has been collected,” the statement reads.