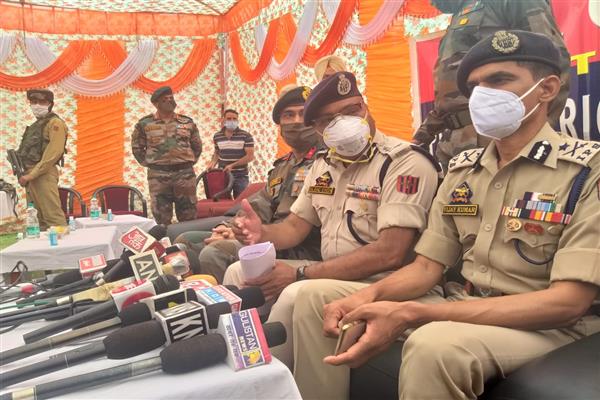 Handwara, August 20: Terming the recent encounters in north Kashmir as big success for goverement forces, Director General of Police (DGP) Dilbagh Singh on Thursday said the forces have wiped-off  militant leadership in Kashmir valley by killing 26 top commanders during the past seven months.

Addressing a presser in Handwara, DGP Dilbagh Singh said that these encounters in which four top commanders were killed are a major success for security forces and will provide a major relief to local people in the valley.

“We have been successfull in breaking the leadership structure of militants in Kashmir. 26 top most commanders were killed during the last seven months in different encounters across Kashmir valley,” he said.

Regarding the recent encounters, DGP said, “In Kreeri Baramulla, biggest Let Commander from North Kashmir Sajad Haider, his Pakistani aide Osman and a local Anyatuallah were killed in an encounter with security forces,”he said, “There were two-three groups that were working with LeT which included Naseer, who was killed in Handwara and Sajad Haider, who was killed in Baramulla. Naseer and Haider were working closely in North Kashmir. Nasir was a sharp shooter and a dangerous Militant who was trained in Pakistan. He was involved in the killing of many security forces, which included some CRPF personnel.”

DGP said Naseer was likely to carry out a big strike in north Kashmir after the killing of Sajad alias Hyder.”

He also said that security forces this year saved sixteen youth from militancy and returned them to their families.

Regarding the probe in alleged staged encounter in Shopian, he said” Investigation is going on in the right direction. Police is also carrying out a seperate probe in it” (KNS)