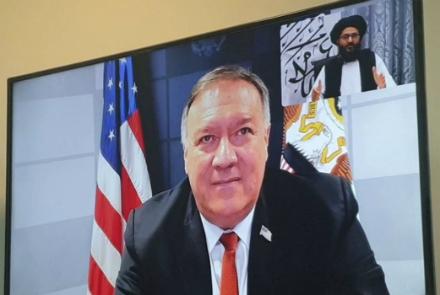 Srinagar, August 04: The US Secretary of State Mike Pompeo had a video conference with the Taliban’s deputy leader Mullah Abdul Ghani Baradar and discussed the start of the intra-Afghan talks and the ongoing situation, said spokesman Suhail Shaheen, Tolo news reported.

The two sides called the release of the remaining Taliban prisoners “important,” Shaheen said, adding that the US secretary of state also welcomed the Eid ceasefire, the report said

Khan has expressed the hope that the current momentum of the Afghan Peace Process will be further built to implement the US-Taliban Peace Agreement in its entirety leading to Intra-Afghan negotiations at the earliest, Radio Pakistan reported, Tolo news report said.

Khan also said this while talking to President Ghani who telephoned him to extend congratulations on the occasion of Eid-ul-Adha, it said

Khan highlighted Pakistan’s positive contribution to the peace process, strongly stressing that peace in Afghanistan is of paramount importance, the report said. Referring to the various institutional mechanisms between the two countries, he highlighted the importance of working together to further strengthen bilateral relations, the report added.

He said Pakistan looks forward to the next session of the Afghanistan-Pakistan Action Plan for Peace and Solidarity at the earliest.