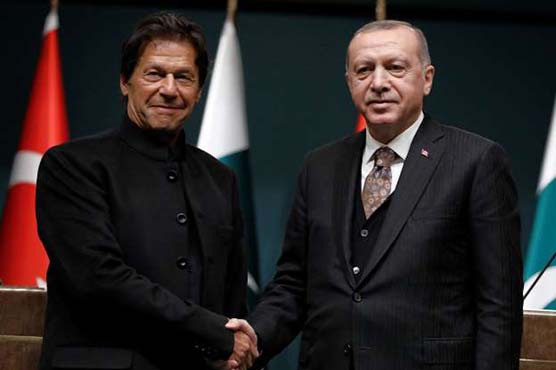 Dawn reported that the Turkish leader also called Prime Minister Imran Khan on the occasion of Eidul Azha and the two leaders shared their views on a range of issues.

“President Dr Arif Alvi and President Erdogan exchanged Eidul Azha greetings in a telephonic conversation. Important matters including Kashmir and Covid-19 were discussed,” a tweet by Alvi’s office said as quoted by Dawn.

It quoted President Alvi as saying that occupation regimes were continuing their “extreme repression” in Palestine and Indian-occupied Kashmir even during the coronavirus pandemic.

“[The] Turkish President assured that his country would continue to support Pakistan’s stance on Kashmir as both brotherly countries have similar goals,” according to a second tweet.

Erdogan also invited Alvi to visit Turkey after the end of the Covid-19 pandemic, the report said

While congratulating Erdogan on the reopening of Istanbul’s Hagia Sophia as a mosque after nearly nine decades, President Alvi “reiterated Pakistan’s steadfast support to Turkey on its legitimate interests and assured that Pakistan will continue its policy to provide Turkey with all possible support,” the report added.