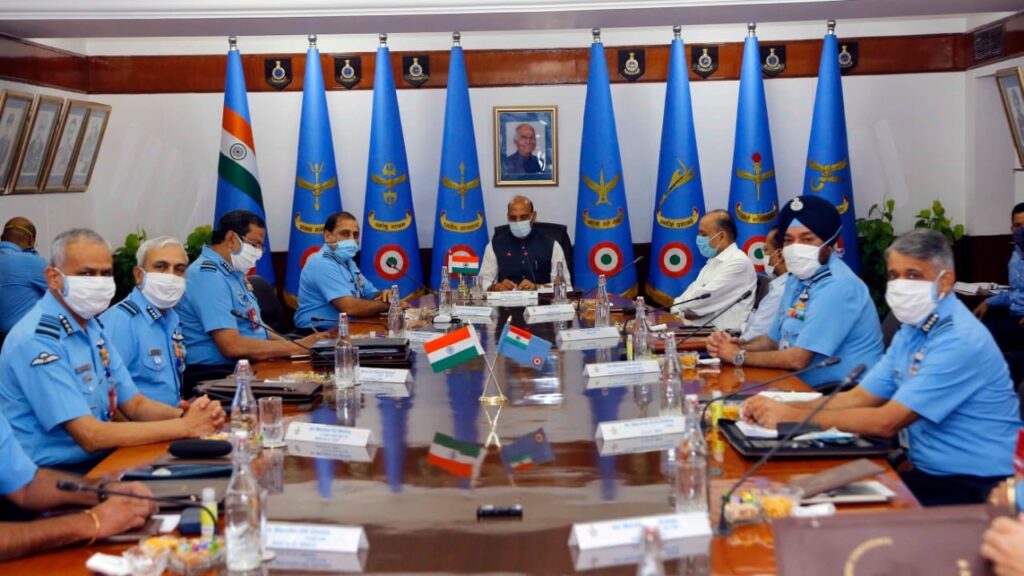 Srinagar, July 22: Amid the ongoing tensions between India and China on the Line of Actual Control (LAC) in eastern Ladakh, Defense Minister Rajnath Singh has urged Indian Airforce (IAF) to stand ready to handle any eventuality.

“Raksha Mantri (Defense Minister) appreciated the proactive response by the IAF in bolstering its operational capabilities over the past few months. He stated that the professional manner in which IAF conducted the air strikes in Balakot as well as rapid deployment of IAF assets at forward locations in response to the prevailing situation in Eastern Ladakh has sent a strong message to the adversaries,” a hand out of the ministry of defense stated.

“Raksha Mantri said that the nation’s resolve to defend its sovereignty stands firm on the faith its people have in the capability of its Armed Forces. He alluded to the ongoing efforts for de-escalation on LAC and urged the IAF to stand ready to handle any eventuality,” the statement added.

Defense minister made these remarks during the Air Force Commanders’ Conference (AFCC) at Air Headquarters.

Chief of the Air Staff,Air Chief Marshal RKS Bhadauria welcomed the Hon’ble Raksha Mantri and other senior officials from the ministry of defense were also present on the occasion.

While praising the “stellar contribution by IAF in supporting the nation’s response to COVID-19 pandemic and the role played during several HADR missions,” defense minister in his address highlighted the need to achieve self-reliance in defence production and noted that the theme chosen for this AFCC – ‘IAF in the Next Decade’ – was very apt for enhancing efforts towards indigenisation in the days to come.

He lauded the progress made towards enhancing synergy and integration within the three services since the appointment of CDS and creation of DMA.

The CAS in his address to the Commanders stated that the IAF was well prepared to counter short term as well as strategic threats and the units were evenly poised to counter any aggressive action by the adversary.

He noted that the response by all Commands in ensuring deployment and readiness of forces was prompt and laudable. He emphasized on the need to focus on the ability to handle situations at a short notice for ensuring a robust response.

During the three day conference, commanders will review the current operational scenario and deployments before deliberating on building the IAF capabilities in the next decade to tackle all emerging threats.