Each and every party worker can’t be provided with security, issue already taken up with police top brass: Ashok Koul 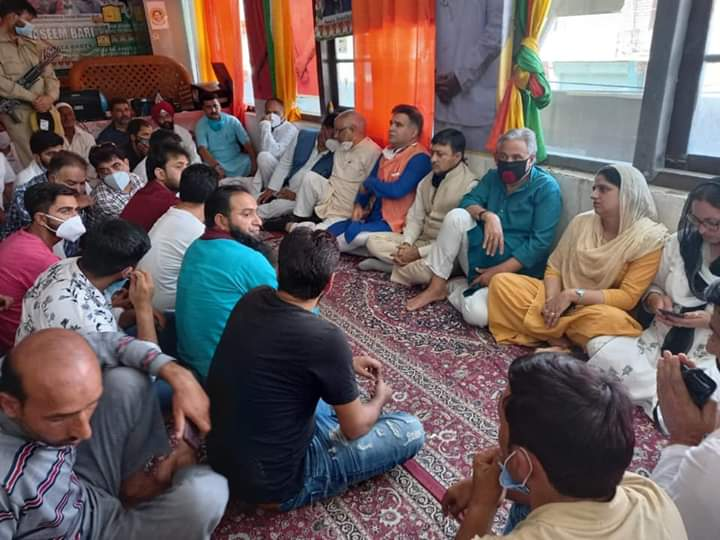 BJP leaders condoling with the family of party leader Wasim Bari who was killed by suspected militants along with his father and brother at Bandipora.

Srinagar, July 16: A week after the killing of Bhartiya Janta Party’s (BJP) young leader, his brother and father, the gross root level workers have started to resign from the party stating that the party has failed to elevate them and the local administration continues to ignore them.

In the past eight days, at least four ruling BJP workers/leaders resigned from the party alone including a woman from north Kashmir districts of Baramulla and Kupwara.

The aggrieved party leaders and workers alleged that the party has failed to facilitate and work for the interest of poor people and the unending threats and security concerns bother them which forced them to quit from the party.

Mubeena Begum, a woman BJP worker, who resigned from the party said that since she joined the party she could deliver what she had promised to the people of her area. “Party also didn’t support the way it should have and the local administration don’t pay heed to our concerns. This is the reason why I am resigning,” she said.

Aijaz Ahmad, another party leader who resigned earlier said that the local administration never accepted them as BJP leaders and workers and that became the main reason why they failed to deliver. “I still remember we have worked under immense pressure and threats but successfully managed to conduct BDC elections still we were left unrecognized,” he said.

Bashir Ahmed Malik, a Handwara resident, who also resigned from the BJP party, said that there are some personal issues behind his resignation and his family members also forced him to give up the post fearing the ongoing threats.

“I have daughters back home who are my responsibility and now there are threats that actually bother me. The security apprehension is a hurdle before anyone these days”, he said.

J&K BJP General Secretary (Org), Ashok Koul that the life threats can’t be ruled out at this time.

“There is a fear among our workers. Some posts are threatening in which they have been warned of dire consequences,” he said. “These leaders were part of different political parties who in the past have worked for their benefits but BJP doesn’t serve for personal interests since the local administration appropriately knows what has to be done and political leaders shouldn’t interfere in those affairs.”

As far as the security, Koul said that BJP has already taken up the issue with the police top brass and the security review of each and every political worker is being conducted. “Every single worker cant be provided with the security cover, but those who have genuine threats and are vulnerable, will be given a proper cover very soon,” he said—(KNO)