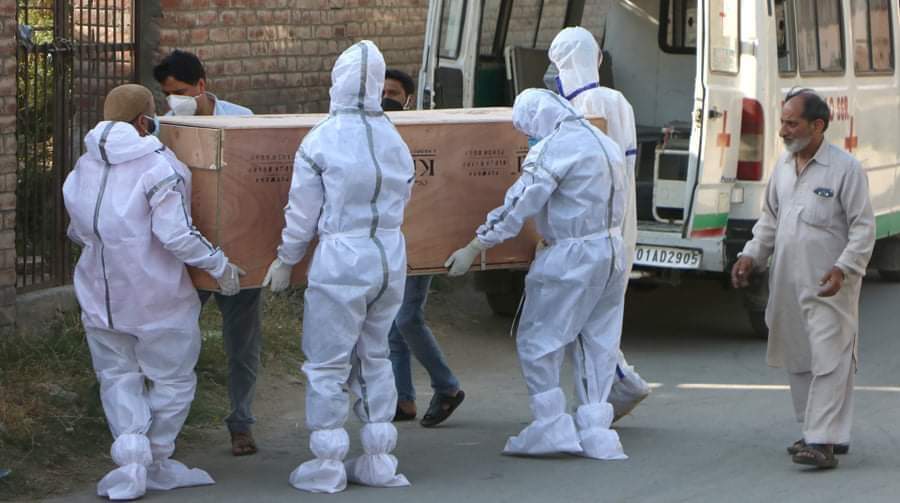 Srinagar, June 20: The death toll due to covid-19 rose to 80 in Jammu and Kashmir as swap sample report of a 65-year-old man from Budgam district returned positive for the novel coronavirus on Saturday.

A resident of Kanihama area of Magam, the sexagenarian passed away at medical emergency ward SKIMS Soura at 1.30 a.m., Professor Farooq Jan, Medical Superintendent of the tertiary care hospital said. “Admitted on June 19, he was diagnosed of B/L CAP. His sample was taken on the same day,” he said.

Earlier, an 80-year-old woman, who passed away at SMHS hospital here, returned positive for the novel coronavirus.

CMO Kulgam Dr Fazil Kochak said that the woman’s body was taken forcibly by attendants soon after her death at the hospital earlier today. A resident of Khudwani, the elderly woman was admitted to the hospital on June 18 and her swab sample was taken on the same day.

Dr Salim Tak, Medical Superintendent CD hospital said that the woman from Safa Kadal with underlying heart ailment and diabetes died six days after she was admitted to the hospital, one of the exclusive facilities for the management of the covid-19 patients in the Valley. “She was admitted to SHMS and after testing positive, she was referred to CD hospital on June 14,” he added.

Professor Jan said that the 55-year-old woman from Tujan Pulwama died four days after her admission to the tertiary care hospital. “She was referred from SMHS hospital as a case of meningioma (brain tumor) with obstructive sleep apnea (a serious sleep disorder in which breathing repeatedly stops and starts),” he said, adding, “She died at 6:45 a.m. due to cardiopulmonary arrest.”

So far, as per the official data, 80 people have succumbed to the virus in J&K—nine from Jammu and 71 from the Valley.

Srinagar district with 19 deaths has the highest fatalities followed by Baramulla 13, Shopian (10), Kulgam (9), six each in Jammu and Budgam, five each in Anantnag and Kupwara, Pulwama (three) while one death each has been reported from Bandipora, Doda, Udhampur and Rajouri. (GNS)