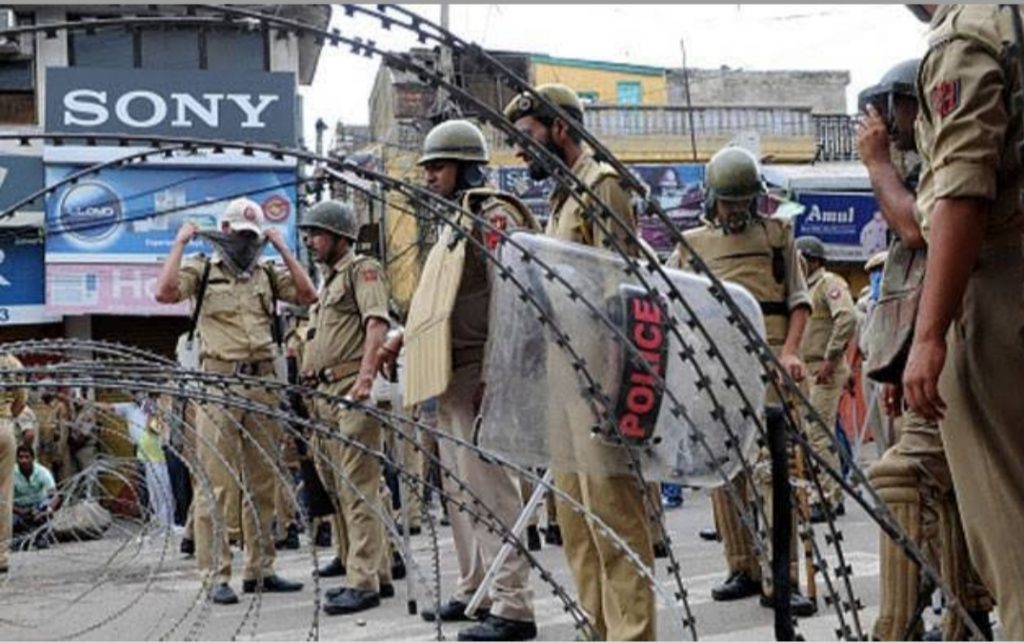 Srinagar, June 03: In last over two decades, an amalgam of 30 trade bodies in the Valley on Wednesday said that Kashmir has witnessed 3000 days of lockdown, thus simultaneously deteriorated the situation of business community here, which they claim are struggling to survive amid the prevalent situation in Jammu and Kashmir.

However, the traders also stated that the special package of Rs 20, 000 Crore announced by the government excludes the business community of Kashmir.

Over 30 trade bodies addressed the joint presser today at SKICC during which Sheikh Ashiq, president of Kashmir Chambers of Commerce and Industries (KCCI) said that the traders who have suffered in past several decades in Kashmir demand measures for the revival of their respective businesses.

“The only aim to hold a joint presser today is to raise our voice for the business fraternity across the Valley who have suffered huge losses due to the time to time situation witnessed here,” he said.

“In particular, our businesses are suffering from last ten months and we have never come out of the lockdown. Though, we have met the Union Home Minister and Union Finance minister and MoS PMO regarding the losses faced by the traders. We have brought into their notice about the challenges being faced by the business community in Kashmir,” he said, adding that they were expecting a good result from the meetings but the COIVD situation that occur following the meetings spoiled it all.

He said that the situation of business has got further deteriorated after the COVID pandemic in Jammu and Kashmir.

“Our businesses friends in India have raised voice over the losses suffered by them. The government later announced a package for the people who got affected. We have been excluded from the package as the package was announced for those only who have suffered losses in last two months. But, the businessmen in Kashmir are facing the losses from last ten months,” he added.

“As the government has announced the phase one of unlock, the business fraternity here is facing yet another challenge i.e. lack of cash flow,” he said, adding that such a situation is the outcome of the lockdown from last ten months

He added that as the unlock 0.1 has been declared, they have got disappointing feedback from the tourism sector, who are expecting no tourist flow in the Valley this year (2020) while are also doubtful about the next year.

Similarly, he said horticulture sector has also suffered huge losses. “Although the sector managed to transport the stuff in the month of August-September last year, but now, they too are struggling. Handicraft industry is also on decline up to 50-60 per cent from past several years,” he said.

About transport sector, Ashiq said that they are on the mercy of God as only Allah knows how they are feeding their families because they have not earned even single penny post August 5 decision. Besides, the general traders including shopkeepers are also worried about their future.

Ashiq further stated that the students have got badly affected in Jammu and Kashmir, saying that it is the only place across the country where students are being deprived of the 4g internet services, which is a vital tool at present to get the education. “The restoration of 4G internet services seems a far off dream. Our students are suffering. The nation can’t go forward without education, which has got badly affected in Jammu and Kashmir,” he said.

“We need to get the attention of the government at present as the ten months of suffering needs to be mitigated. The people at helm should take comprehensive measures for revival of Kashmir’s business,” he said. He also expressed concern over the alarming increase in the unemployment rate in Jammu and Kashmir.

Iqbal Ahmad, Kashmir Economic Alliance (KEA) Vice-Chairman while talking to the media men said that the Valley has witnessed 3000 days of lockdown in over two decades. “Whenever the valley witnessed lockdown, the business fraternity got badly affected. Since 1999, Kashmir has witnessed 3000 days of lockdown. Despite witnessing such a situation, none from the traders here become Vijay Mallya and Nirav Modi. The Kashmiri’s trader who has borrowed money from the banks here is repaying the amount in instalments and on apt time,” he said, adding that “We do deserve the package.”

“We have approached the State governments in past, they heard us; many packages were given in the past. I will not deny that but when Rs 8000 Crore were announced for Jammu and Kashmir after floods, a meagre amount was given to the business community here,” he said.

He further stated that the situation that arose across the globe due to COVID has made it clear to the countries that what consequences the economy face due to the shutdown.