Cop tests positive for COVID 19, but protocols flouted by not putting him in quarantine; stayed at police station, met people: Medical report 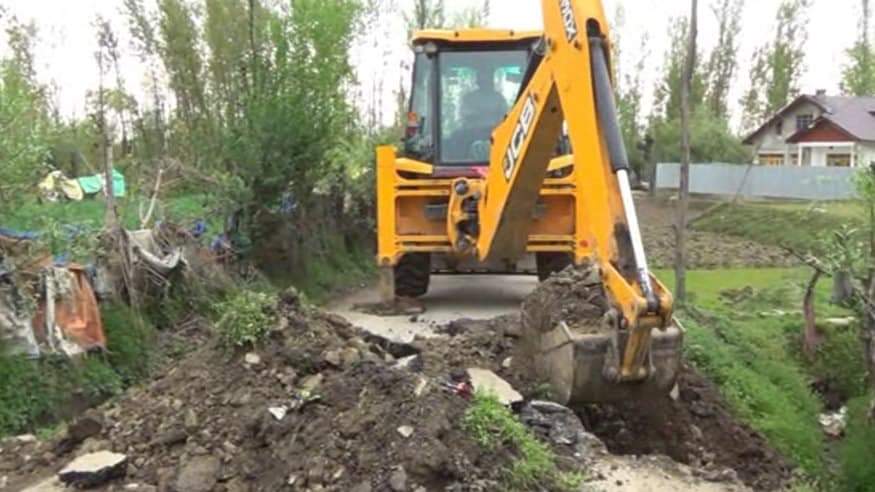 A road being dug to stop movement of people/vehicles in the Village.

Budgam: A police man, who tested positive for corona virus was deployed at a Qaurantine centre in Bemina, stayed at a police station and met people, after he was let go off from his duties 12 days ago, official travel history of the patient revealed.

According to the medicos, who prepared the travel history of the patient hailing from the Rathsun village of the Budgam district, the cop was deployed in the vicinity of COVID 19 patients, and should have been isolated or quarantined before he was taken off his duties. They said by not doing so WHO protocols were flouted as there is possibility more people could have been infected.

The travel history of the patient prepared by official medicos in Budgam, a copy of which is with The Kashmir Press reveals that the said the cop from the Indian Reserve Police was posted at a quarantine center in Karim Abad Bemina where Covid19 suspected were quarantined and few of them were later on declared Covid19 positive.

“After April 4, he joined back in the police station located at Batamaloo,” the copy reads.
The report read that he was stationed at the Batmaloo police station till 11 April “without isolation or quarantine or any other precautionary measure.”

“It further reads that the cop was screened on 11 April at JLNM hospital Rainawari, from where he travelled home in a personal vehicle along with one person.”

Dr Imtiyaz Maqbool Banday, Nodal Officer Medical Block Beerwah told The Kashmir Press that after they received a message from the local police station about the positive case at Rathsun, they swung into action to promptly trace him at his residence.

As per WHO protocol, Banday said:
“A person, who has come in contact with Covid19 patient, must be put in necessary quarantine for 14 days. But as per the firsthand account of the policeman (patient), he was not provided with any such facility at the police station”.

“We have followed the protocols and sent him to tertiary hospital for treatment,” Banday said.
Besides this we have also traced 24 persons who have come in contact with him.

He, however, added, that “there is no official statement from Police or district administration Srinagar as of now in this regard.”

Whether it was due to the negligence on part of authorities that put lives of people at risk for the corona virus infection in Rathsun, Deputy Commissioner Budgam, Tariq Hussain Ganie told the Kashmir Press; “the responsibility lies of District police Srinagar.”

“I can’t keep a vigil on each and every police men from here, it is their duty to follow protocols,” he added.

Deputy Commissioner Srinagar, Shahid Iqbal Choudhary could not be reached for the comment.

However, his assistant, who took the phone call on his behalf, said that he would reach out with their statement as soon as DC Srinagar is available.

As soon The Kashmir Press will receive the statement from the DC office Srinagar, the story will be updated accordingly.

As soon as the news of cop being tested positive spread in a Rathsun and surrounding villages, there was complete panic as people started to ponder whether they have come in contact with the patient or not.

The entire locality has now been declared as red zone and road connecting Rathsun to Magam (nearest town) has been cut by digging a pit that splits the road, barricades have been erected to halt movement of vehicles and people in the area.

Announcements blared out from loudspeakers in mosques and police jeeps that whosoever have met the Covid19 patient, should report to authorities immediately.

“But the question remains whose fault is this,” a local questioned?

“The negligence is on the part of authorities who didn’t followed up the WHO guidelines and let the constable go home, thus putting lives of villagers at risk,” Shahid Mir (name changed), a local of the Rathsun village, said.

Talking to The Kashmir Press, Shakir Mushtaq a student hailing from Beerwah area said; “allowing this person to go home without undergoing necessary quarantine clearly reflects the failure and non-seriousness of administration.”

Only link road connecting to nearest town dug out.

Government must enhance its capabilities & follow necessary guidelines from WHO in order to deal with the emerging situation in our village, Shakir added.

Khan Aqib a research scholar from Wadwan voiced the same concerns and said, “While at one end the administration is an asserting of using much of its efforts to cease or save the valley from the ongoing horrendous covid19 virus, but at the other end the story is looking contradictory and far beyond of reality.”

“The question remains, are they really serious or else behaving to show off, in order to escape the public displeasure?” he said.