We are back, but we need your help!

When we look at The Kashmir Press web page, it looks like a story frozen in time. Pictures, headlines, and the news text- published on August 4, 2019- fossilized like mummies- as if it was the web page from a different time. It remains so.

On August 05, the constitutional status of Kashmir was changed after Article 35-A was revoked. All of a sudden, complete communication blockade was enforced. Hundreds of people including members from the legal community, businessmen, pro-Delhi and pro-resistance politicians and protesters were arrested and lodged in jails in and outside Kashmir.

In times of the digital age, when the news travels like thunder, The Kashmir Press came to a standstill. It remained silent for eight long months (to be precisise). It was unimaginable for us to even dream about being able to publish even a small news item for such a long period.

For us, it was beyond shock and awe.

The Kashmir Press started as a multimedia news website, knowing well that digital transformation of news is going to take over the traditional (print/electronic) media in the near future. With that in mind, we planned on using our skills and meager resources to build a multi-media website supporting independent journalism.

The idea was to report the unreported issues by the traditional media. Or issues which generally remained uncovered. We wanted to break that very taboo.

We were successful to an extent. We did stories on subjects which remained off the beaten path for the traditional media in Kashmir. We were treading slowly. Due to our independent news coverage and free opinion, we were taken seriously, and were received well.

The Kashmir Press was at least able to carve out its name on the media landscape of Kashmir.

The Kashmir Press has also implemented its own business model whose sole motive was intended towards sustaining the website costs. The ‘off and online’ business model was slated to bear results after a two years incubation period. But, we had never imagined that our plans and innovative business model would come crashing down like the house of cards with a single stroke of the government enforced communication blockade after August 4, 2019 evening.

In the ensuing eight months, everything changed for us. The Jammu and Kashmir state was reorganized, and the whole old administrative structure was broken. Internet was banned and so were other modes of communication. Everyone suffered a loss. 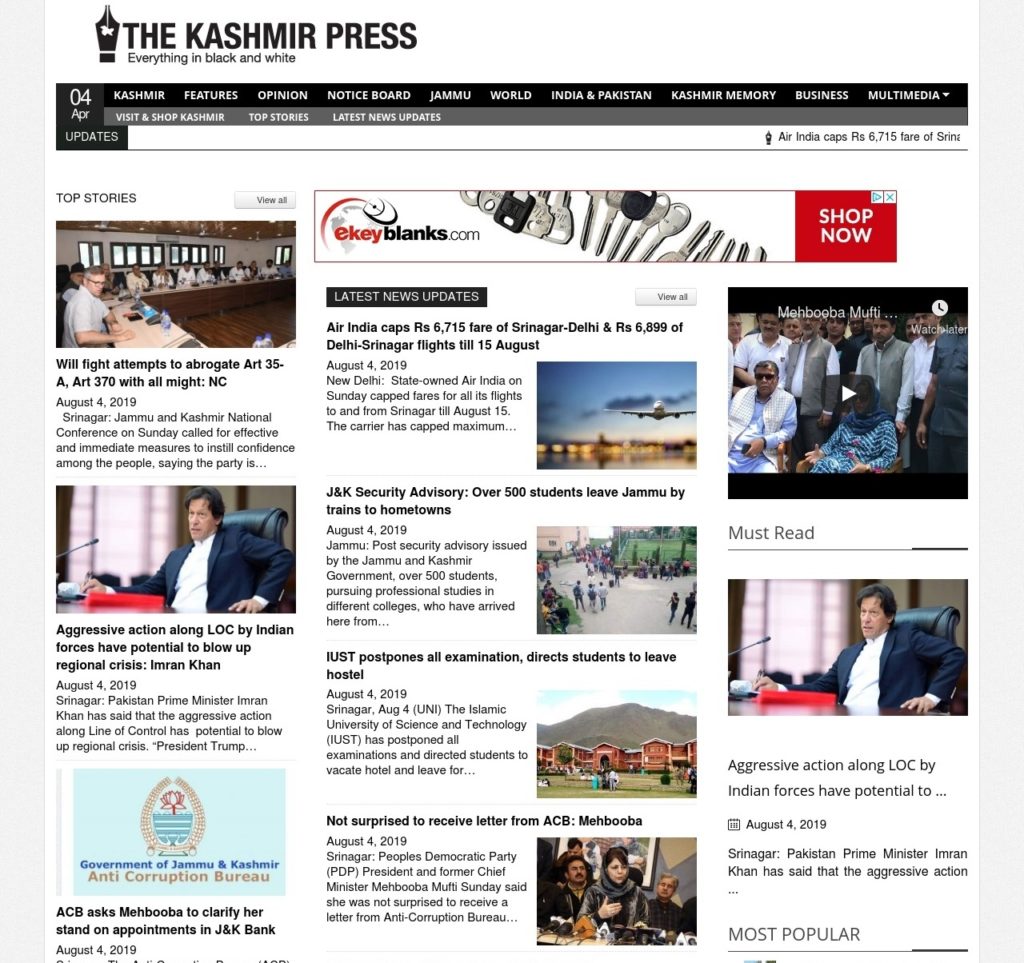 The screen grab of The Kashmir Press Web Page on the night of August 04, a day before the website went off after article 35 A was revoked and the communication including internet was snapped in Jammu and Kashmir.

We could have operated from the government provided ‘media facilitation center,’ but could not do it since we wanted to act in solidarity with the people of Kashmir who were suffering on account of the communication blockade. Even if we have desired otherwise, we would not have been able to operate from the ‘media centre’
because of paucity of space, time, and low speed internet.

Now we are again here after government abolished the ‘white listing’ of the websites, social media ban and restored extremely slow 2g internet. Fortunately, after slightly increasing the band width of 2g internet services in the the wake of COVID 19 pandemic outbreak, the web page loads and, as such, content can be uploaded. Not to mention, the painfully slow speed is an irritant as it obstructs the speed of the job.

The Kashmir Press will need to start from scratch again as everything we planned stands shattered. It will take long time to implement business models or shore up resources for the venture. We need to build the news website brick by brick again since we lack the man power and the required resources right now.

The first and the foremost challenges will be to keep the website alive and running. We will need your support in terms of finance and human resources so that we will be able to take it forward and make it a vibrant independent media platform in Kashmir. We pledge once again to work tirelessly and carve out a niche for ourselves.

We hope the readers/users will come forward and generously contribute to The Kashmir Press. We will make sure that the resources are well spent and we will do our best to be transparent on our part.

It would not be an easy job to start again, especially in a time when such an uncertainty surrounds us. But we need to remain hopeful. There is always a silver lining among dark clouds. The courageous are the ones who take the first step, and then the second, and then on to the future.