Jammu: A spell of rains on Saturday created havoc in parts of Jammu region while the city was completely waterlogged and the passengers at Jammu Airport faced tough times as water entered the terminals.

The two day rains exposed the Jammu Municipal Corporation as city came to standstill due to waterlogging and over flowing of drains.

However, passengers at the Jammu Airport faced hardships after a portion of a rooftop got partially damaged due to rains and the water entered the terminals. 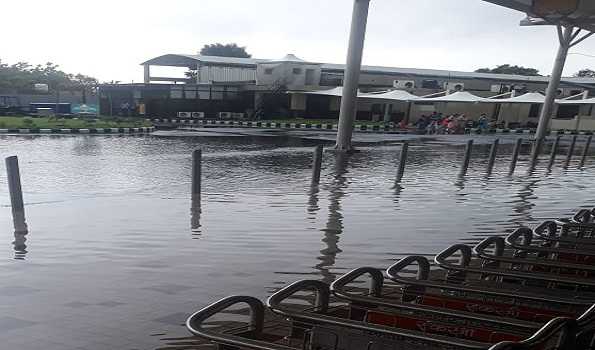 Reports from Kathua district said that Hiranagar Police along with locals launched rescue operation after a Bus on way to Jammu from Billawar struck into flash flood near Pacca Kotha and escaped off by being washed away. Police officials told that all passengers have successfully been evacuated.

In Doda at least 25 sheeps killed and two persons were seriously injured after a landslide hit the residential house in Baggar area of tehsil Assar in Doda district.

Landslide occurred early morning at around 0600 hours on Saturday, owing to overnight rains due to which a mud house collapsed, in mother and son injured after getting burried under the debris.

Director MeT, J&K Sonam Lotus said that Currently its raining in Jammu, Katra, Batote and cloudy to overcast in most districts of J&K.

“Ocassional light to moderate rain is most likely at scattered places of Jammu and Kashmir today including on yatra routes Phalgam, Holy cave, Baltal-Holy Cave,” he said adding that there is no forecast of any heavy shower.

He appealed people to remain cautious for next few days.