New Delhi: Congress members in Lok Sabha for the second consecutive day raised the issue of the US President Donald Trump’s much controversial remarks on Kashmir mediation on Wednesday and insisted that Prime Minister Narendra Modi should himself clarify the matter in the House.

“Pradhan Mantri Jawab Do” and “Pradhan Mantri Hosh mein aao” slogans were heard in the House during the Question Hour after Speaker Om Birla disallowed Congress floor leader Adhir Ranjan Chowdhury demand that Mr Modi should respond to members’ queries on the issue.

The Speaker ruled that as External Affairs Minister Dr S Jaishankar has already given an ‘authorised response’ on the issue on Tuesday, the matter should be treated as closed.

“I have already given my ruling,” Birla said.

Making a brief intervention, Parliamentary Affairs Minister Pralhad Joshi said he did not understand why the opposition members were raising the issue again. 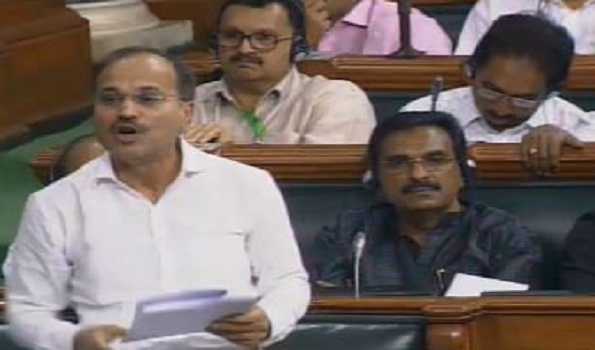 “At one time, they said, Prime Minister is now allowing his ministers to function……, now when the Minister (Dr Jaishankar) has given a statement and clarified everything, there was no ground for raising the matter again…..What is their problem, I do not understand,” Joshi said.

Congress leader Adhir Chowdhury said since the Shimla Agreement was inked by the then Prime Minister Indira Gandhi and Pakistani leader Z A Bhutto in 1972, it was known to all that any outstanding issue between India and Pakistan are bilateral.

“There was no room for any third party mediation….now after Trump’s statement entire country is debating what has PM Narendra Modi to say on the issue, but Modiji is silent,” he complained.

Trump’s statement that Prime Minister Modi has asked him to ‘mediate’ on Kashmir dispute between India and Pakistan had rocked both Houses of Parliament on Tuesday also.

Amid slogan shouting, Parliamentary Affairs Minister said, “I will appeal to the opposition members to go back to their seats and allow the House to function….if necessary they can raise it after Question Hour and Defence Minister (Rajnath Singh) will respond”.

Rajnath Singh is also the Deputy Leader of the Lok Sabha.

However, the slogan shouting by Congress members continued and the party’s floor leader Adhir Chowdhury insisted, “we should know, what really transpired between Prime Minister Modi and US President Trump”.

In identical statements in both the Houses on Tuesday, External Affairs Minister said it has been India’s firm and consistent policy that “all outstanding issues with Pakistan are discussed only bilaterally”.

“No such request has been made to the US President,” Dr Jaishankar has said.