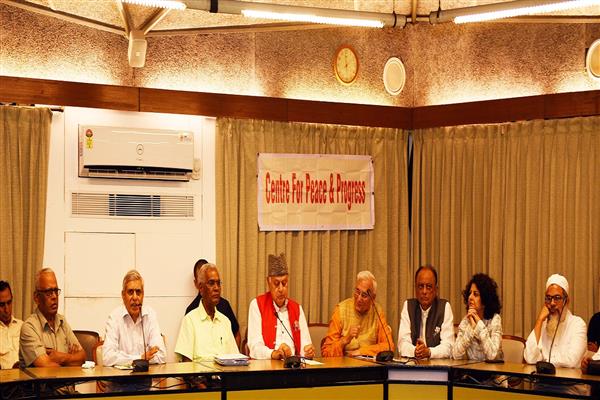 Srinagar: A two-hour-long discussion was held at a high level conference titled ‘Jammu and Kashmir, the way forward’ under the auspices of OP Shah led centre for peace and Dialogue at IIC, New Delhi.

The participants including prominent leaders, civil society members, journalists and budding scholars disagreed with the Modi- led government’s handling of Kashmir and suggested dialogue with people of the state with restoration of dignity of institutions in the state.

The participants were equally critical of New Delhi and JK leaders for their failures to clinch a resolution through people- friendly approach, but were disapproved over the ‘terrorism’ unleashed in the state.

NC leader Farooq Abdullah was the key participant who called for respect for commitments made to people of the state, end to hate politics and coercive measures, change of attitudes and restoration of institutions was the star attraction.

Former legislator and senior journalist Nizamuddin Bhat opened the debate with the desire that conferences as this should serve as a legitimate forum to gather public opinion on Kashmir which needs to be honoured by powers that be without any bias or expediency.

He emphasised importance of connect wd the people the real stake holders and called upon New Delhi not to isolate or undermine people of the state through dangerous discourses on political and constitutional issues including 370 and 35 A.

OP Shah thanked participants for their valuable contributions through a candid and healthy debate and hoped that such interactions will help break the ice on Kashmir for positive engagements in future, to determine the way forward.