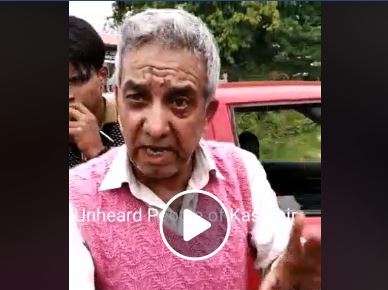 Qazigund: In a display of communal brotherhood which has existed in Kashmir for centuries, the locals of Levdoors area in Qazigund of south Kashmir on Sunday afternoon rescued a Kashmiri pandit from the wrath of Security forces in the area.

Sources said that a Pandit, Krishan Ji Raina, who has been living in the locality since childhood was rounded up by a patrolling party of the CRPF in the Levdoora area without any provocation.

“Security forces initially questioned him for living in Kashmir despite being a Hindu?” after which they started erecting bamboo sticks on him,” they said.

Krishan Jee son of Gopi Nath Raina of Levdoora has sustained multiple injuries during the assault by CRPF men, the front window of his car has also been smashed as well Speaking about the incident, he said that he was on way to Qazigund market to get medicines for his ill wife, when the CRPF men intercepted him and started beating him resulting to multiple injuries.

“Local muslims gathered around the area to rescue me. A man with begging hands pleaded them not to thrash me, however they assaulted him too.” Krishan Jee alleged. The incident sparked anger in the locality and dozens of other Muslims rushed to help the Pandit man.

“I am thankful to the Muslim community who saved me from the hands of CRPF men, otherwise who knows,” Krishan Jie said.

Krishan Jee also said that the security forces are defaming the local Muslim population, who otherwise are helpful and rescued him from the wrath of government Forces.

The locals later took Krishan Jee to the nearby hospital where he is being treated. A Police official upon being contacted said that the incident has not come into their notice as of now. (KNO)