Srinagar: Hurriyat Conference (G) spokesperson GA Gulzar was on Saturday arrested by Jammu and Kashmir Police from his residence in Srinagar and was shifted to Police Station Sher Gari, a Hurriyat spokesperson said. 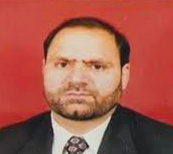 Terming his detention “unlawful and unjustified”, Geelani criticized the state police action and said that political space is being denied by creating a situation of uncertainty and political turbulence in the state.

“By pushing people to wall India will achieve nothing, they should face the political leaders and workers on political turf,” he added.