‘Do not build castles in the air’: Geelani tells Modi to accept Kashmir reality 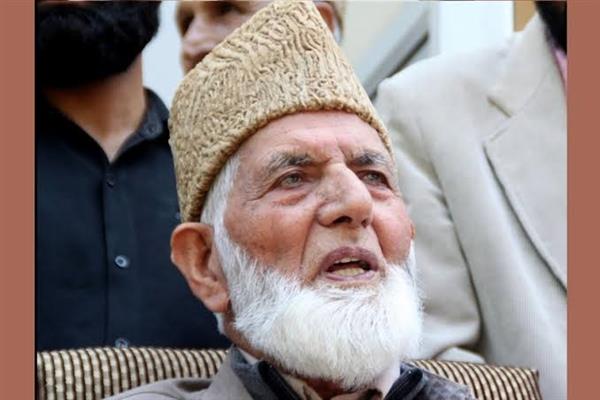 Srinagar: In a strong reaction of Indian Prime Minister, in Maldives, pertaining to Kashmir issue, Hurriyat Conference (G) chairman, Syed Ali Geelani termed it as a blatant negation of the hard facts of history of Indian division of 1947.

Vehemently disproving arguments put forward by Prime Minister Narinder Modi regarding the position of India on Kashmir, the Hurriyat leader advised Indian Prime Minister not to build castles in the air.

“Do not to beat around he bush and do not to flee from the reality of Jammu and Kashmir where more or less one million occupational military, para-military and police forces have rendered the local population in a hell,” Geelani said.

Terming Kashmir as an outcome of non-compliance of Indian Independence act of 1947, the basic formula for the partition of India, the Hurriyat leader laid stress on the early resolution of Kashmir issue by granting right to self-determination in a peaceful atmosphere, which has been guaranteed by the United Nations and India is the signatory to it.

Pro-freedom leader castigated the Indian stubbornness of parroting Kashmir as an integral part of it and its illogical rigidity, said that as a nation people of Kashmir love peace, dignity and freedom.

“We are not segregating any part of India, but are demanding the end of forcible and illegitimate occupation,” Geelani said,

Urging the United Nations and other world powers including USA, Britain, France, Russia and China to expedite their moral, diplomatic and political efforts to resolve the Kashmir dispute and deter Indian barbarism, ruthless killings of innocent people, incarceration of political activists and gross violation of human rights in Kashmir.

Rejecting terrorism in all its forms, the veteran Hurriyat leader appealed these world powers to differentiate between terrorism and a legitimate movement for right to self-determination and also take a serious note of Indian state terrorism used to suppress the popular demand for civil liberty and freedom from forced subjugation of the state of Jammu and Kashmir.