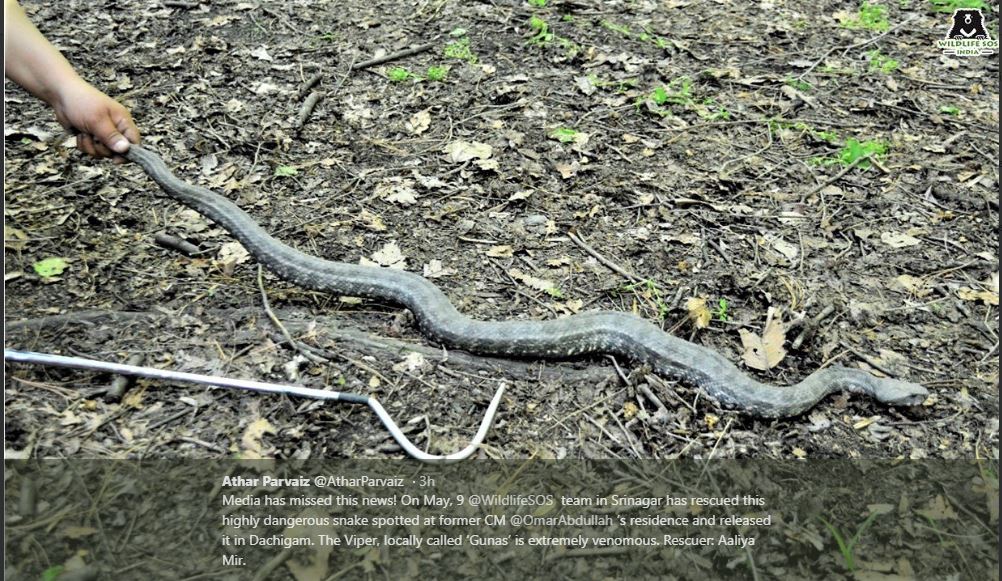 Srinagar: On Thursday morning, a rescue team of Wildlife SOS (Save or Skin) had to rush to former Chief Minister, Omar Abdullah’s Gupkar residence where a highly venomous snake was spotted by his security guards.

The snake was rescued later and released in Dachigam.

The incident was, however, not reported in local media and people didn’t know about it until journalist Athar Parvaiz shared it on Twitter and Facebook.

“Media has missed this news! On May, 9 @WildlifeSOS team in Srinagar has rescued this highly dangerous snake spotted at former CM @OmarAbdullah ’s residence and released it in Dachigam. The Viper, locally called ‘Gunas’ is extremely venomous. Rescuer: Aaliya Mir,” he tweeted.

Media has missed this news! On May, 9 @WildlifeSOS team in Srinagar has rescued this highly dangerous snake spotted at former CM @OmarAbdullah ’s residence and released it in Dachigam. The Viper, locally called ‘Gunas’ is extremely venomous. Rescuer: Aaliya Mir. pic.twitter.com/uUlQInjopq

Wildlife SOS said that in a daring operation, a four-foot-long extremely rare and highly venomous & Levantine Viper was rescued by Wildlife SOS from the former Chief Minister’s residence in Srinagar on Thursday morning.

“The rare reptile was examined and then released in its natural habitat after it was confirmed fit for release,” Arinita, an official of Wildlife SOS, said.

“In the early hours on Thursday, the Wildlife SOS team operating out of Srinagar in Jammu and Kashmir, responded to a distress call about a dangerous snake spotted at the residence of the former Chief Minister’s residence. The security personnel spotted the reptile which was taking shelter in a wall covered with plants in the garden,” the official said. 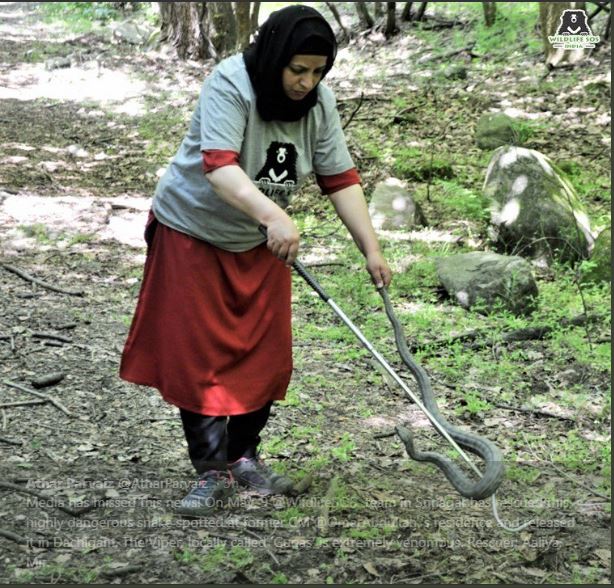 She added that the Wildlife SOS Team led by Ms. Aaliya Mir rushed to the location and identified the snake as a Levantine Viper, a highly venomous snake.

“Having had years of experience rescuing snakes and other reptiles, Aaliya Mir carefully extricated the snake from the dense vines and transferred it into a transport carrier, designed for the purpose. The rescue Operation lasted nearly one hour,” Mir said

The snake was kept under observation for a few hours and on being affirmed fit, was carefully released in Dachigam National Park.

“It was a dangerous operation as the Levantine Viper, locally called ‘Gunas’ is extremely venomous, requiring us to exercise caution and be very careful. The number of such sightings in urban areas has increased in the recent past. There is a need to educate the public about co-existence with the wildlife sharing our landscape. Wildlife SOS works closely with local communities to spread awareness at various levels in the state of Jammu and Kashmir,” Arinita quoted Aaliya Mir, the Project Manager and Education Officer of Wildlife SOS in Srinagar as saying.

The Levantine Viper (Macrovipera lebetina), according Wildlife SOS, is a venomous viper that feeds on rodents, lizards, birds etc. Their venom is hemotoxic causing extreme pain, inflammation and tissue damage at the bite site. The Levantine Viper is found in Kashmir and also in Turkey, Syria and Afghanistan.

“Though slow moving, they are capable of fast strikes when provoked and will give out a warning hiss before striking. When dealing with venomous snakes, it is important to keep them very calm and maintain safety to avoid accidents. “Wildlife SOS has rescued this species of Vipers in Srinagar in the past as well including one from a residential colony in Jawahar Nagar,” she said.