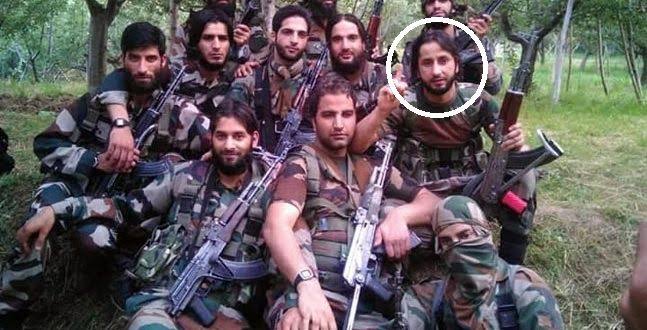 Awantipora: It all started on that cold evening in October of 2010.

That’s when Burhan Wani left his home at Shareefabad in South Kashmir, only to return draped in garlands after six years, and with an enormously proud but equally sad and wailing crowd following his coffin.

The crowd was in a tizzy, not knowing whether to mourn or to celebrate his death. Eventually, they did a bit of both. They were wailing over his death, and praising his elevation into immortal martyrdom with pride.

Burhan Wani had died only to live on forever.

A decade long lull in Kashmir’s armed struggle took a new turn in July of 2015 when the photo of a dozen or so affable local youth, in camouflage and proudly holding AK-47s in their hands, first went viral online.

It was the dawn of what is now called The New Age militancy in Kashmir.

While as the government claims to have closed the ‘Burhan group; chapter for good after Saddam Padder’s death, one image still lingered above the graves of the others. It was that of the rough- and- tumble, wavy haired Lateef Ahmad Dar, alias Lateef Tiger. He was the only combatant in the group photo with Burhan who has not been killed, making him:

On May 13, 2018, the Indian army released a list of the 10 most wanted militant commanders of Kashmir and Lateef Tiger is listed as Number 6. The list was prepared after the death of Saddam Padder. Earlier he was the most wanted Hizb-ul-Mujahideen  militant.  Now he was replaced by Lateef. 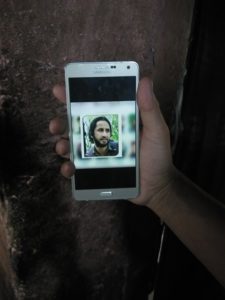 Zubair displays a picture of his brother, Lateef .

At around 8:30 at night on March 8, 2014, the atmosphere inside the Sher-e-Bangla National Stadium in Dhaka was electric. The Pakistan and Sri Lanka cricket teams were engaged in a tough fight, and the match was in its slog overs. A similar tension could be felt thousands of kilometres away inside a small grocery store in Dogripora, a tiny village in South Kashmir’s Pulwama district.

“They always disappoint us,” said Lateef, young and tall and with his mane of long black hair shimmering under the tungsten light. Pakistan was about to lose to Sri Lanka.

“I am going back home, Zubair. It is pretty late. Ammi, must be worried,” he said to his younger brother.

All over sudden there was a huge bang, the lights went off, and all went dark. The TV screen’s afterglow still shed a bit of light on everybody’s’ scared faces, as women were heard wailing loudly on the main road along the banks of the river Jehlum.

Ghulam Dar, an 84 year old man and father of the village Sarpanch, was dead. He had been shot in the face by unknown gunmen. This happened while he was on his way to the mosque for his evening prayers.

The next day, army vehicles were rushing along the village roads, with masked men sitting in the turrets, and with their eyes darting from side to side while casting suspicious glances upon every village boy on the road.

The Jammu and Kashmir police were on tenterhooks and doing everything they could to nab the killers of the old man. After all, he was the father of the village head.  But soon enough, everything went back to normal. The days passed as usual. For most people it had already become a thing of the past.

With the skin cracked on his hands, Lateef, a carpenter by profession, got busy again with his daily chores. Ghulam Hassan Dar, his father and professional mentor, had given up the job a few years ago after Lateef had learned the trade.

Ishfaq, a graduate student, was one of his closest friends. The son of a teacher, he often accompanied him to work so he could keep his friend company. Although a bit younger than Lateef, they could often be seen together somewhere along the banks of the Jehlum, hanging out and watching the silent waters under the russet sky.

But every now and then the police could be seen at the house of the village head. A door to door questioning had also started by them. The gunmen had been invisible to everyone. Clearly, a sense of fear was palpable among all the eye witnesses.

A week passed by. It was a normal day. Lateef as usual went to work. At around 5 in the evening, police picked up Ishfaq and asked him about Lateef’s whereabouts. Within an hour, both Lateef and Ishfaq were in police custody, accused of killing the Sarpanch’s father.

“When Lateef had not returned by the evening, we tried to call him, but there was no response. That night seemed unending. I still remember how Ammi spent the whole night on the veranda waiting for bhai to return,” said Zubair, Lateef’s younger brother.

As dawn finally broke, someone came with the news that Lateef had been arrested in connection with the murder of the old man. It was then that our mother finally collapsed. We immediately went to the police station, but neither Ishfaq nor Lateef were anywhere to be seen. We only came to know about their location when a policeman in civvies was kind enough to tell us that they had been taken to Budgam jail. Once we reached there and asked about Lateef, they denied that they had arrested Lateef or anybody else by that name.”

“For the next ten days, my mother and the rest of us were literally begging the officials at the Budgam police station to tell us Lateef’s whereabouts.  During nights, we went looking for him in far off places of our village, fearing that he might have been killed and dumped on the road somewhere. Finally, on the eleventh day, the police called us inside a room and told us to wait. Soon Lateef was brought in. He had scars on his face, probably the result of red hot charcoal or cigarette butts having been burned through the flesh.  My mother held him tight against her chest, but he could only utter a few words lifelessly, pleading “ hatai, moaje may bachaetav, may deetav gooel kahn akha wani,” which literally translates as “ oh, my mother, please save me; please shoot me so I won’t feel this pain.” He could not even sit on a chair properly. His anus had been injured when they inserted a thick rod inside it while interrogating him,” Zubair adds while displaying a photograph of Lateef on his cell phone.

“They brought my son to Awantipora jail and put him there for a month without ever filing a charge sheet. They brought Ishfaq, too. His arm was broken, and he had bruises all over his body. We went to meet them every day. We thought they would be let go. No guilt was ever proved. One day when we went to meet them, police officials told us that they have been taken to Srinagar central jail after being convicted of murder. We were helpless and too poor to fight the system. All we could do with our hard earned money was to hire an advocate, which we did. After spending six months in jail, their sentence had still not been announced. The wait was gruesome. After another month, the flood came and totally submerged our house.  All our belongings were ruined or swept away in the flood. Among them were the legal papers that we had prepared to apply for his bail. The only things left were his childhood school books, but even they had been drenched in the grubby water above his Almirah. They still lie there even now,” said Ghulam Hassan Dar, Lateef’s father. 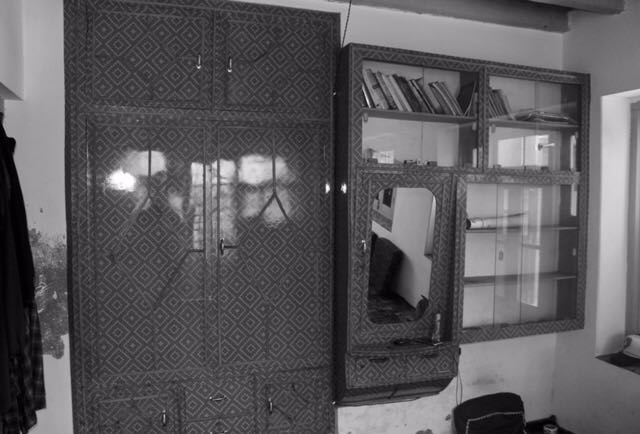 Both Ishfaq Dar and Lateef Dar were finally granted parole for ten days on the day before Eid and after spending seven months in jail.

“People were sighting the moon in sky, but my moon was in front of my eyes. Lateef was finally home though just for ten days. He cleaned up the whole house. After clearing the flood debris from the rooms, he mopped all the floors and did not even allow me to help. After five days of Eid, he went out for Maghrib Prayers but did not return. We thought he might have gone to Ishfaq’s place to visit his parents. We thought we would go to Ishfaq’s home who lived near us. But as we stepped out of our gate, Ishfaq’s parents had already come, trying to see if Ishfaq was at our house. We searched for both throughout the night, but they were nowhere to be found,” said Lateef’s mother with a stoic face.

When asked whether Lateef had ever come back to see his mother, Zubair answers, “One cold winter evening, almost three months after he had left us, the door of our kitchen slowly opened with a shriek,  and Lateef entered. He had grown a long beard. Clad in a Pheran, he held a rifle on his shoulder. There was a long pause as if everyone’s mouth had been sealed shut. His mother just stared at him. He came over and hugged her. They said nothing to each other, and he only cried profusely for about ten minutes. She could not even lift her arms long enough to hug him back. It was as if her entire body was frozen while tears were rolling down her cheeks.”

Lateef told the family that he knew that he had picked up the gun only to get killed someday soon. He told them he would not have done it but for the fear that he might be hanged for a crime he did not commit. Then a voice from behind the door called him back outside.  As his brother glimpsed through the window, he could see Lateef breaking down until a man wearing glasses held him tight and managed to calm him down before they left through the tin gate outside.

The man present there was Hizb-ul-Mujahideen commander Riyaz Naikoo, according to the family.

Finally, after spending eight years in militancy, Dar was zeroed in at South Kashmir’s Shopian in the pre-dawn fight on May 03, 2019 with Maulvi Tariq.

Both were killed on Friday in a fierce gunfight with Army and Police.

Dar’s killing brought a closure to the “Burhan Group”.