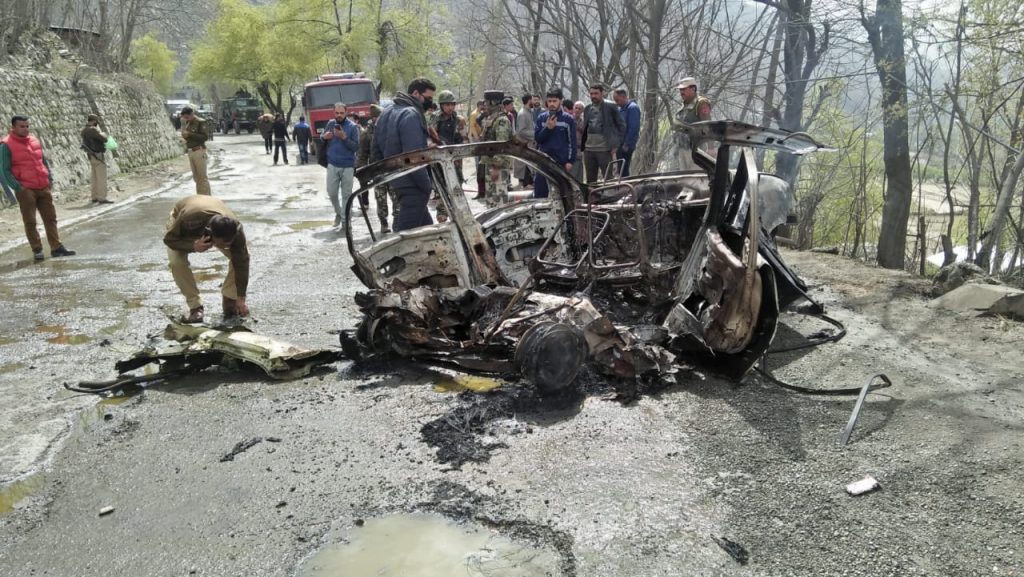 Srinagar: A team of National Investigation Agency (NIA) on Saturday visited Banihal to collect samples from the scene of the blast in which Santro car was completely damaged while a paramilitary CRPF vehicle suffered minor damages.

Official sources said that a team of NIA arrived at Banihal late afternoon and visit the blast scene. They collected samples, the officials said. An official of the NIA also confirmed collection of the samples but declined to comment further.

Earlier, police sources said that a team from the Hyundai Motors India visited the scene and based on the chassis and other details, identified the owner of the vehicle.  It has been registered on 21 February 2011, they said.

There were no casualties in the incident that occurred near the Jawahar Tunnel on the highway around 10.30 a.m. The incident triggered memories of the February 14 vehicle-borne suicide attack by a Pulwama youth on a Central Reserve Police Force (CRPF) convoy in his native south Kashmir district that claimed the lives of 49 paramilitary personnel.

According to a preliminary investigation, the blast near Tethar village occurred after one of the two gas cylinders in the Hyundai Santro model caught fire.

Police said the Santro was completely gutted in the fire and at the time of the blast, CRPF vehicle, which was passing through the highway at the time of the incident, suffered slight damages in the rear side but all the personnel on board escaped unhurt.

The blast created panic in Banihal and soon police rushed a team of experts to the spot to ascertain whether the blast happened due to cylinder explosion or due to any explosive material.

“Hitherto, it seems to be a cylinder blast. A team of NIA also visited the spot and collected samples. Further investigations are underway,” SDPO Sajad Sarwar said .

Asked about the possibility of militant attack and use of remote-controlled explosion, he said: “Possibility could be anything. Investigations are underway but so far it comes to be cylinder blast.”

Asked about the fate of driver, he said: “We are trying to trace the driver and this (driver’s escape) is making the case a bit suspicious.”

The driver of the Santro Car allegedly disappeared from the spot and police has so far not established whether he fled away or rushed to hospital in order to get treatment for the injuries which he might have suffered in the incident.

Police have launched a manhunt to find out the driver. Traffic on the strategic highway was also halted due to the blast and it resumed soon. (GNS)