‘India belongs to each of us, irrespective of our color, creed and faith’: Farooq Abdullah 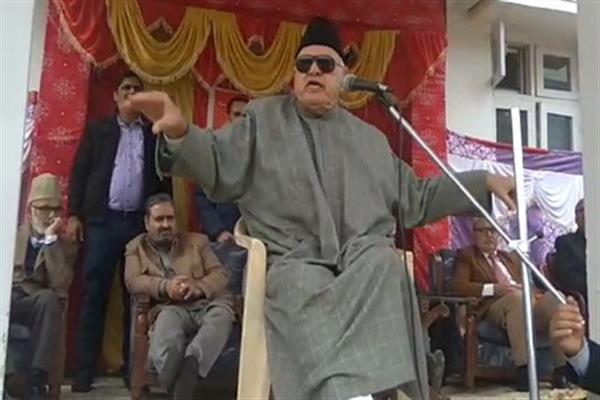 SRINAGAR: Jammu and Kashmir National Conference (NC) President Dr. Farooq Abdullah on Tuesday asserted that India Indians, “it belongs to each of us”, “irrespective of our color, creed and faith”

Taking a dig at Prime Miniister Narendra Modi led BJP government, he said they have  miserably failed to deliver on the promises it made during the election campaign of 2014 saying that a failed government and a failed prime minister needs to be shown the door.

Party president while addressing a public meet at Mujahid Manzil, Budgam said that democracy is a humbling experience and that people of the country are seeking answers from PM Modi on issues of price rise and unemployment.

Dr Farooq said that the PM Modi squandered the mandate of the people by its imprudent policies.

“We in parliament knew that the government has failed to deliver on key issues that the country is facing, so they would create a war like situation in the country to divert the attention of people from the real issues affecting poor particularly farmers and the labor class,” he said.

Dr. Farooq while flaying PM Modi for creating war hysteria in the country to divert the attention of people from farm distress, price rise and other foreign policy failures said, “War is no solution, it brings with itself innumerable miseries. The tallest leader of BJP once said that friends can be changed, but neighbors cannot be changed. However Modi failed to carry forward the legacy of Atal Bihari Vajpayee.”

Party president while flaying the Modi led government for devaluing the institutions of the country by impeding their working.

“But let clear it that India is for all Indians, it belongs to each of us, irrespective of our color, creed and faith.”

“Not just that the religious minorities have been threatened, attempts were made to erode their political rights conferred upon them by the very constitution of India,” he said.

Party president said that the agenda of BJP-RSS is divisive, and we saw how they are contriving to vitiate the atmosphere of our state.

“But we as peace loving people should never allow ourselves to fall prey into the hands of their shenanigans, we should strike unity and work for a country where in all of us live amicably and derive our share from the development and prosperity of the country.”

Party president while cautioning the people against the RSS-BJP and their cronies and henchmen said, “The forces as are inimical to the identity and integrity of state will try their level best to use men, money to impede election, but we have to put up a strong front and work tirelessly to ensure that all the candidates of NC win by resounding margins. Only then we can work for a tolerant and secular India. Our vote will make a difference.”