‘Never believed in gun, but it is better to die than to live this life,” says Rizwan’s friend who joined militancy 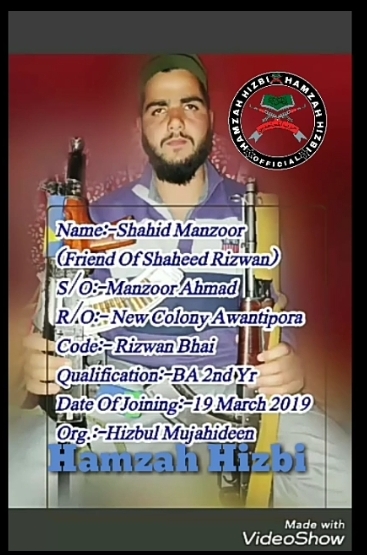 Shahid Manzoor, friend of Rizwan Assad, who joined militancy. His audio wherein he describes reason for joining militancy after his freind’s death has gone viral on social media

Srinagar: A couple of days after the “custodial death” Rizwan Assad Pandit of Awantipora, his friend, Shahid Manzoor joined the militant ranks, claiming he ‘never believed in the gun,’ but had no “choice” after the “killing” of his companion.

“I am the friend of martyr Rizwan,” Shahid said in an audio clip, featuring his gun wielding picture, viral on social media.

“You all will be aware of the Awantipora incident in which my friend Rizwan was killed after being tortured in the police station. Before as well, we were both called to Awantipora police station and were tortured for no reason. During the torture, they would subject us to improper behavior. They would use extremely foul language and would hurl abuse on our mothers and sisters which a man would be ashamed of even mentioning of”.

“They would torture and beat us, forcing us to become informers or else we will book you under PSA (Public Safety Act). At last both of us were booked under PSA on fictitious charges”.

Rizwan “died” in police custody after he was picked from his home in Awantipora for questioning purpose related to a militancy case. He was then shifted to Cargo Srinagar where he died under custody. His family alleges that he was “killed under custody” after being subjected to ‘brutal torture’.

“Few days ago, the police again arrested Rizwan. The moment I came to know about this, I went underground as I feared that I would also be arrested and then tortured,” Shahid said.

“When I saw my friend Rizwan was killed under custody, that time only I joined the ranks of the militants. Because I know, today it happened with my friend, tomorrow it will happen with me”.

He also rejected the probe into the killing of Rizwan, stating it was a “false promise”.

“Today everybody will protest, will do this and that. Government is claiming that we will punish the guilty, but the truth is that there is no inquiry, no one will be punished. They are making these false claims to pacify the people,” Shahid said.

“Has there been any inquiry into the Asiya and Neelofer case till date? Same will happen with Rizwan’s case. People who believe that government will punish the accused of Rizwan’s killings are living in fool’s paradise”.

He said that he never believed in gun, but had to reconsider his belief after the “killing” of his friend, Rizwan.

“I never believed in gun. And those brothers, who will pick up the gun, I always thought they were playing with their lives. But today, I can tell you with confidence, Kashmiris who are living under constant oppression, the only solution to this situation is gun,” Shahid said.

“I am apologizing to my family since I am leaving you without your permission. I have no other option than this. I also wanted to live. I wanted to look after you”.

“But it is better to die than this life because there is no security to our dignity and life. I know my life will be short, but whatever it will be, it will be a life of dignity. I will be happy that I stood against the murderers of martyr Rizwan and on the day of judgement I will keep my head up before my friend Rizwan”.