Srinagar: Governor of the State Bank of Pakistan Tariq Bajwa has said the country has come out of the financial crisis with the help of friendly countries and the economy has been set on the right path, Dawn reported.

Speaking at a private university in Lahore on Monday, he said uncertainty in the economy had ended. The government, he said, was on the right path and it was capable of meeting all economic challenges.

The governor spoke about the current account deficit, which had hit the economy badly during the current financial year.

The current account deficit was the real cause of concern for the new government headed by Prime Minister Imran Khan. Mr Khan visited friendly countries like China, Saudi Arabia, the UAE, Malaysia and Turkey to seek investment and managed to get financial help to bridge the external deficit.

Mr Bajwa said a plan had been prepared to eliminate the current account deficit and the work in this regard was in progress. He said the deficit was the biggest hurdle for the country and the government was still negotiating with the International Monetary Fund for a package to minimise it. 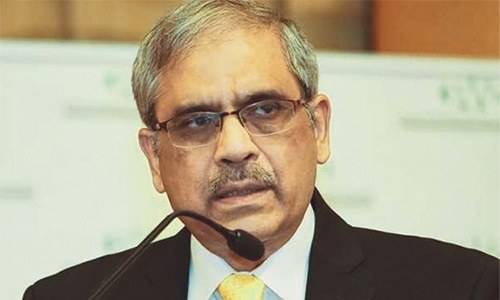 He said the government had not crossed the limit for borrowing from the SBP. It had borrowed Rs3 trillion from the central bank and returned Rs2tr, he added.

The policy shows the government wants to keep the scheduled banks liquid so the private sector could borrow more from the banking system.

According to a latest SBP report, the private sector borrowing has more than doubled from July 1 to Feb 8 to Rs571 billion from Rs264bn in the same period of the last financial year.

The SBP governor said the cases involving Rs600bn were pending in banking courts. He said capacity building was being developed to deal with the huge number of pending cases and for their quick decisions.

He said the cases must be decided quickly so that the banks could use the money involved in litigation.

Mr Bajwa said the SBP had offered to bear expenses of training of judges to help the courts decide the pending cases urgently.

He said the policy to depreciate the rupee had been adopted to reduce the trade deficit, which was the main reason for high current account deficit.