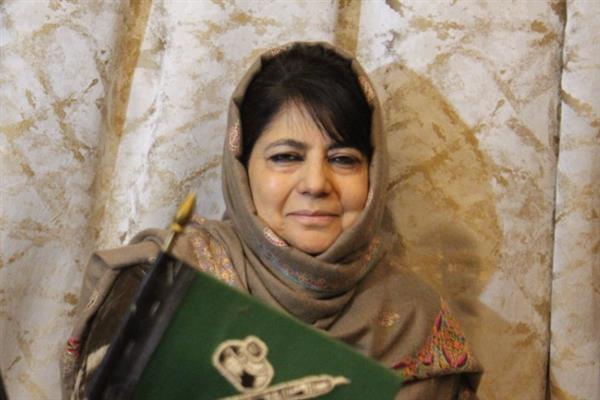 Srinagar: Peoples Democratic Party (PDP) President and former Chief Minister Mehbooba Mufti on Monday said that the party will register a remarkable victory during the forthcoming polls in the state and is this time confident of winning more seats than that of the previous elections.

Addressing party functionaries, leaders and activists of Chadoora assembly segment, Mehbooba stressed for the greater coordination between the workers and the party leaders, stating that every person associated with the PDP must take party’s vision to the common masses of the state and aware them about the PDP’s role in defending state’s special status and providing a bulwark against the present swirling tides.

She stated that PDP’s cardinal principle has always been to safeguard state’s unique identity and make favourable ground for dialogue and reconciliation so that the vicious cycle of violence is stopped and peace is made state’s inseparable feature. “The present wave of harassment and intimidation against the youth is only proving calamitous for the state’s future and has pushed Kashmir towards the precipice of disaster. Instead of militating against the youth, there is a dire need of dialogue with all stake holders for the resolution of Kashmir. The central leadership has to understand that if it continues with its iron fist approach, Kashmir embargo would continue to hangover its head like the sword of Damocles,” Mehbooba said.

Party’s General Secretary and Former Minister Ghulam Nabi Lone Hanjura who was present in the meeting pitched for the dialogue with Hurriyat and Pakistan and said that PDP since inception has been making strenuous efforts to restore peace and dignity in the state and make Jammu and Kashmir a bridge of friendship between India and Pakistan so that not only the state but the entire sub-continent could heave sigh of relief from violence, death and pillage which unfortunately is becoming rampant with each passing day.