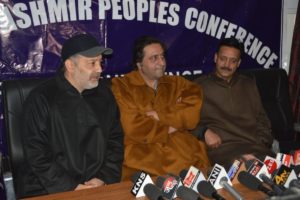 Remembering him as a visionary and inspiring political figure from Jammu & Kashmir, the leaders recalled Mufti’s dedication and unwavering commitment towards the welfare of people of J&K.

Remembering Mufti as fatherly figure and a teacher, Sajad Lone said, “Fondly remember late Mufti Sahib. Had the chance to work under him. An inspiring figure who was a great teacher. I personally learnt a lot from him. I pray his soul rests in peace. He was always fatherly in his approach. How can I ever forget that. And he was so keen that I get acclimatized in the new secretarial environment. And may I add that irrespective of differing political spaces that we occupy u were extremely respectful in your dealings with me.”

Among other leaders of the party Molvi Imran Reza Ansari put forward his tribute in a tweet stating “I have spent a lot of time with the late Mufti Sahib. He was a fatherly figure and a towering political personality whose absence is clearly felt. May Allah grant him eternal peace.”