The Turkish stand appeared in a joint statement issued at the end of a two-day visit by Khan to Turkey on the invitation of Erdogan. Khan’s meeting with Erdogan was followed by delegation-level talks.

Pakistan Prime Minister Imran Khan while addressing a joint press conference with Turkish president Recep Tayyip Erdogan said peace between Pakistan and India could not exist unless the two sides sat together for dialogue. “We are trying to have friendly relations with India and offered the neighbouring country negotiations many times in the recent past, but India refused to talk,” he added.

He said Kashmir was the bone of contention between Pakistan and India as Indian armed forces had broken all records of “barbarity and atrocities” on innocent Kashmiris in “India-held Kashmir”, Dawn reported. “Stabi­lity can come when India and Pakistan sit together for talks,” he added.

Both sides reaffirmed their commitment to achieving and sustaining peace, security and stability in their respective regions as well as internationally. They underscored the need for resolution of the issue of Jammu and Kashmir through a sustained dialogue process and in accordance with the relevant UN Security Council resolutions. 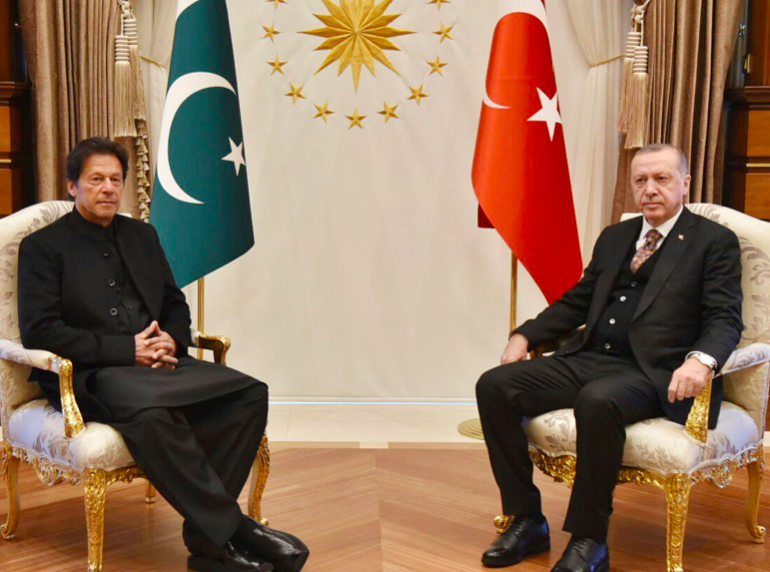 Khan and Erdogan also “recognised Turkish support for Pakistan’s membership in the Nuclear Suppliers’ Group based on non-discriminatory criteria, and reaffirmed that Pakistan’s adherence to the NSG guidelines and participation in the NSG would strengthen global non-proliferation objectives”.

The two nations acknowledged that sustainable peace and stability in Afghanistan could be achieved through reconciliation of all segments of Afghan society with support of regional countries and the international community.

They noted their expanding defence cooperation and expressed their resolve to further strengthening the existing economic, trade and commercial relations.

They also underlined their commitment to fight terrorism in all its forms and reiterated their resolve to counter the Fethullah Gülen organisation which Turkey regards as a terror group.

The two countries called on the international community to support the Palestinian people in realising their quest for an independent and sovereign state of Palestine on the basis of the 1967 borders with Jerusalem as its capital. (With inputs from PTI)