Mujgund gun battle: Story of an injured cow caught in the ‘War’ 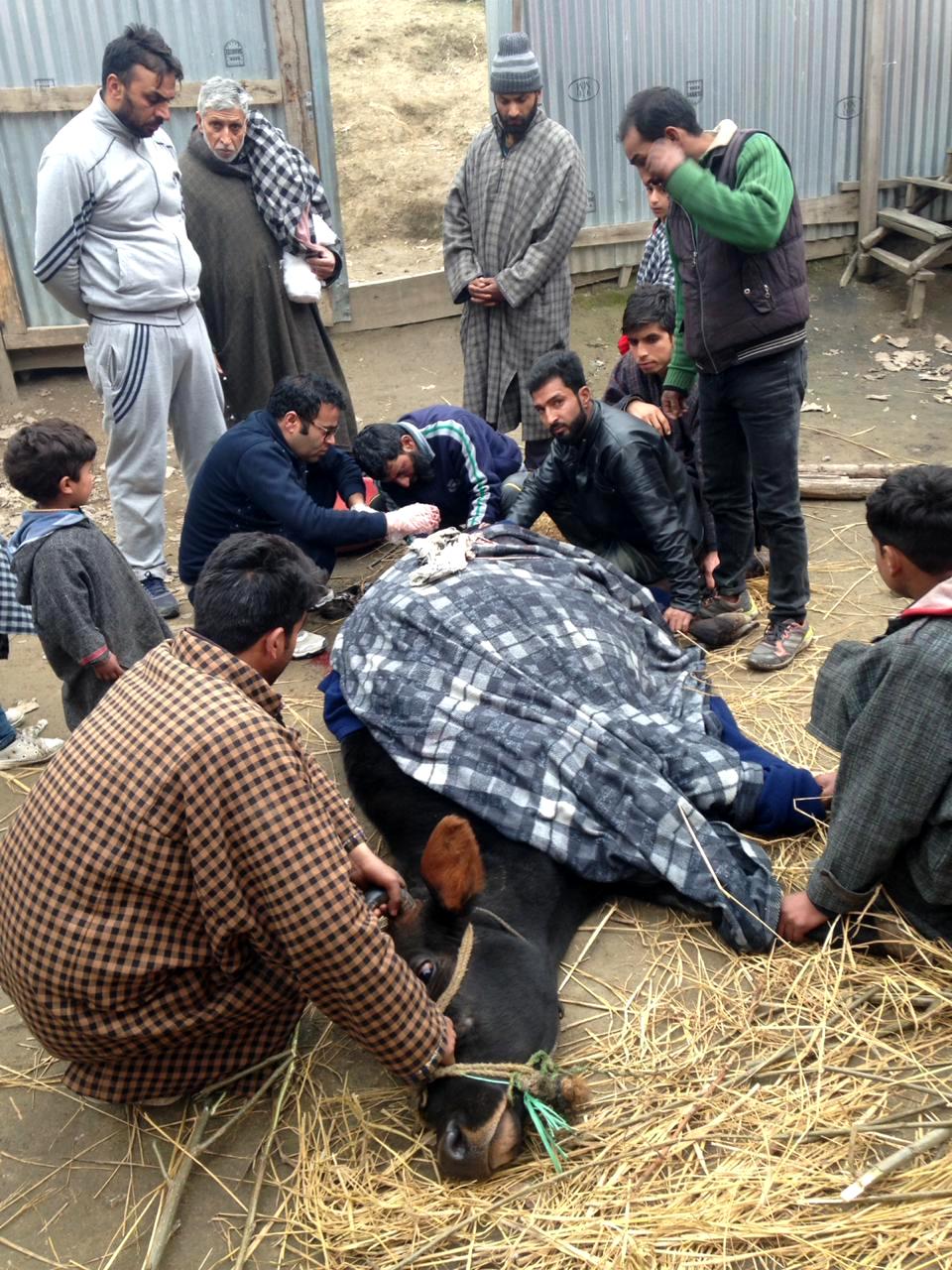 Mujgund:  Nothing survived the rockets, shells, and bullets, fired by the army to overpower three militants during the fierce Mujgund gun battle, which broke on Saturday evening on the outskirts of Srinagar.

She survived the earth shaking explosions which razed seven houses to the ground. She endured the countless bullets which have peppered the trees, houses, corrugated tin sheets, windows, everywhere.

“Blood was oozing out of the body of cow when we saw her,” Mohammad Ashraf Mir, owner of the cow, whose house was also destroyed in the gun battle, told The Kashmir Press.

“When the encounter ended, we were finally allowed by the police to go to our homes. We found that cow has survived the firepower”.

The 18-hour long gun battle left a 14-year old boy including three militants dead while five personnel including those of the army and police sustained injuries.

Soon after, Mir said his neighbors shifted the cow to their cowshed.

“Our cowshed was destroyed due to the fire and explosions,” he said.

“Our neighbors covered her in the blanket as she was trembling due to terrible cold. Her tail had received a deep gash, possibly due to the shrapnel. She also received one bullet in her abdomen, another in her Udder (breasts)”.

Mir’s neighbors said that soon they called the veterinarians.

“The tail of the cow was amputated,” a neighbor said.

“The bullet in the abdomen was kept there. Her udder was treated for the injury as bullet has skidded off her skin”.

The neighbors said the veterinarians have told them the cow will survive.

“But we have kept our fingers crossed,” they added.

The cow is presently lying in the cowshed and wrapped in a blanket. Scare is visible in her eyes and she remains silent, a neighbor of Mir, who is tending her, said. 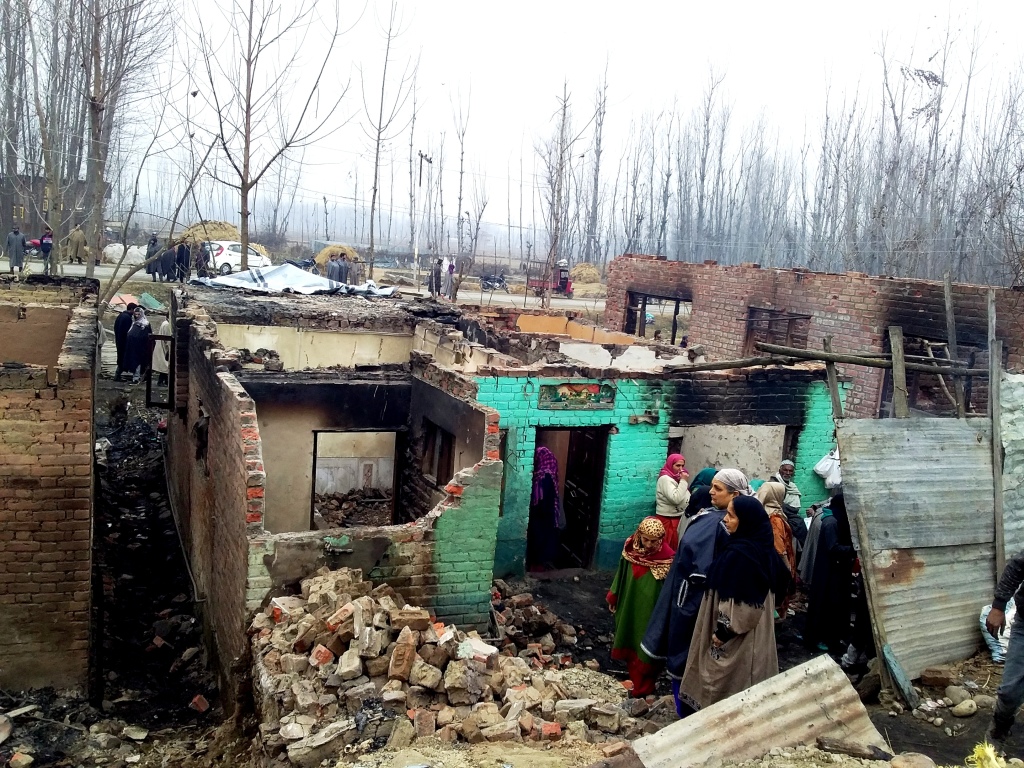 The aftermath of gun-battle scene gives a complete picture of destruction. There is smell of burnt-wood and arsenic in the freezing air.

The clothes and the corrugated tin sheets, peppered with bullets, have flung into the air and got stuck on to the trees due to the force which originated from massive explosions caused by the rockets and shells.

The half-burnt bricks, logs, utensils and tin sheets were littered all over the place. The shards of glass and broken porcelain cups were collected in one of the corners of the muddy courtyard. The colored walls of the houses were sprinkled with bullets.

There was nothing left except bullet marks. Even on the trees and the high tension wires. 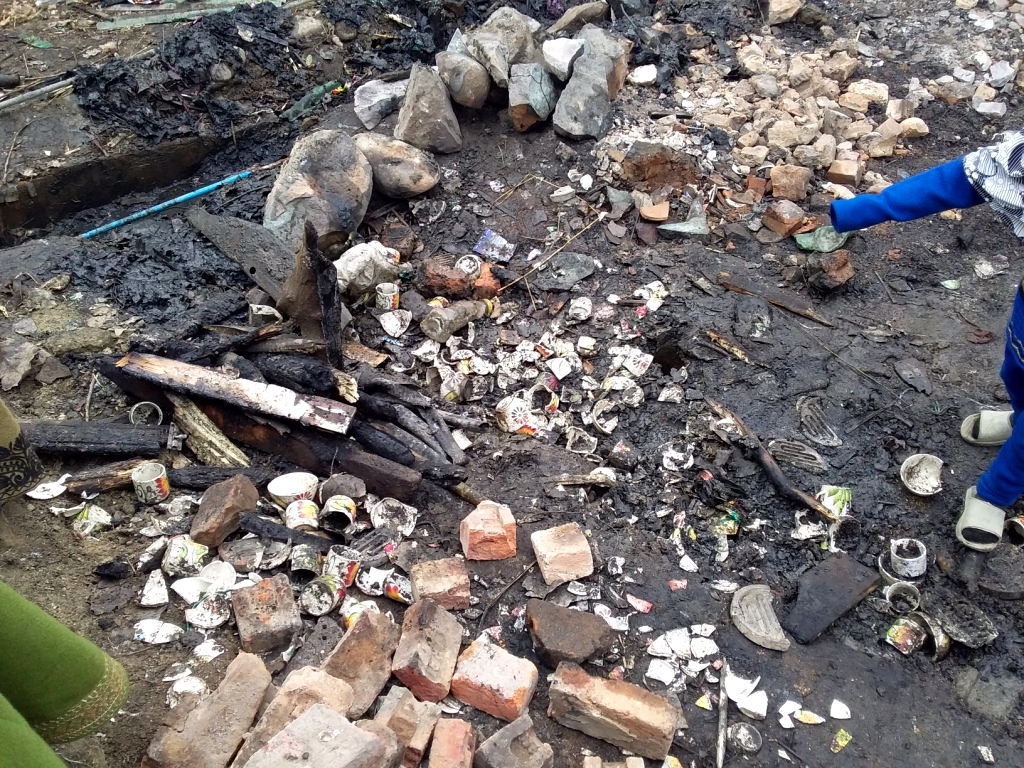 Shards of glass and broken porcelain cups littered in the mud

After the encounter, people in hordes have come to survey the destroyed houses. Neighbors and relatives of the affected families were helping in scavenging the rubble. They collected the burnt timber and tin sheets. They also swept aside the rain soaked debris.

“This tragedy can befall anyone in Kashmir,” a young boy, who happened to be the neighbor of the affected families, said.

“We will rebuild their homes. For the time being we have given them a house where they can stay. We will fulfill their all requirements” 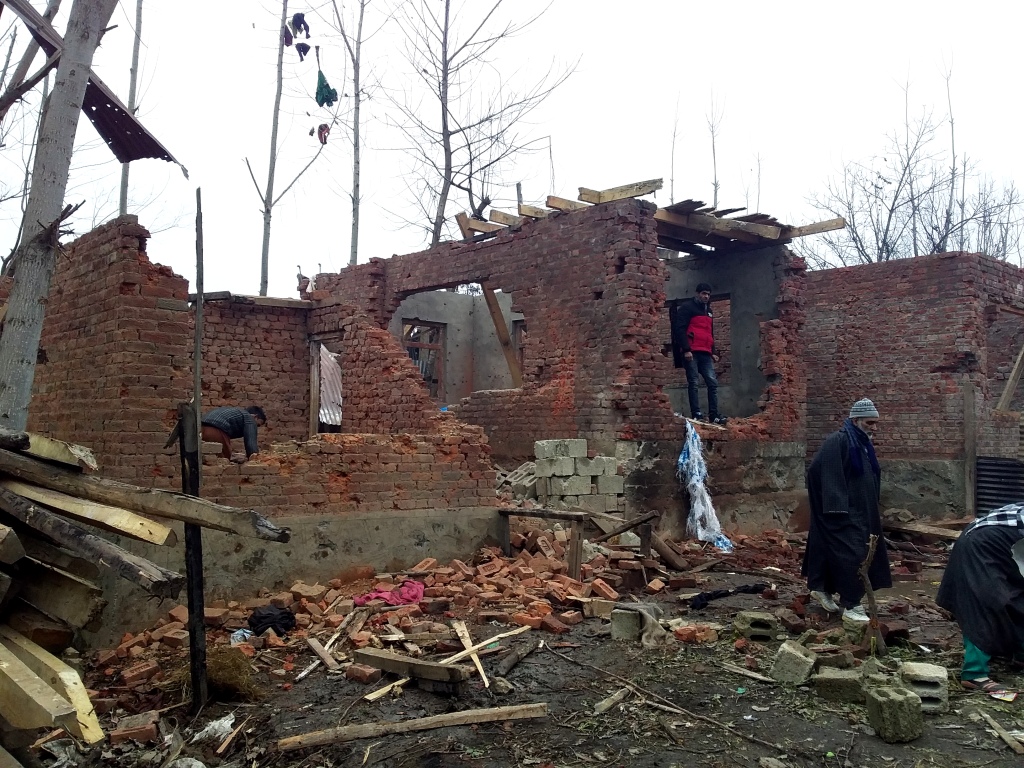 Neighbors and relatives clearing the debris

Mohamamd Shafi Kachroo, one of the owners of a destroyed house, said 45 persons lived in seven residential places which were decimated after army used heavy armory.

He said that family of Ghulam Rasool Kachroo consists of 25 members, who lived in separate three houses.

Kachroo said all of the affected families derived their livelihood by catching fishes from river Jehlum which runs just behind their houses.

“We are all fishermen. We do not have any wealth,” he rued.

He showed his kitchen where the rocket had exploded on the floor and left a small crater. He also showed utensils including water pitchers, boring the marks of bullets. 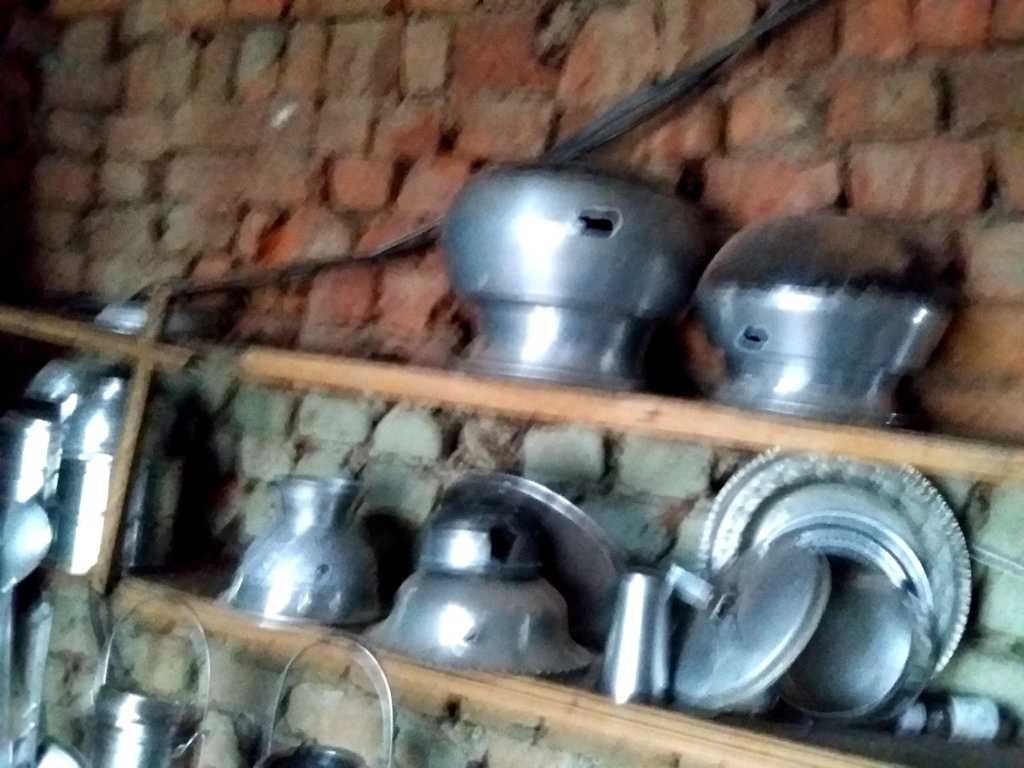 As Kachroo was narrating the ordeal, the men and women would come and survey the rubble of the left over houses.

In the biting cold each family had laid a sheet on the muddy ground, telling their tale of sufferings to the visitors.

“Nothing has left in our houses,” Laali Begum, who owns one of the destroyed house, rued.

“Not even the dust”.

Begum said that her son had built the house with his blood and sweat.

“He also took debits,” she said.

“We have lost the gold and cash. Either it got destroyed or it was stolen by the forces. I lost 50, 000 rupees. Truth is that we do not even possess a needle now”. 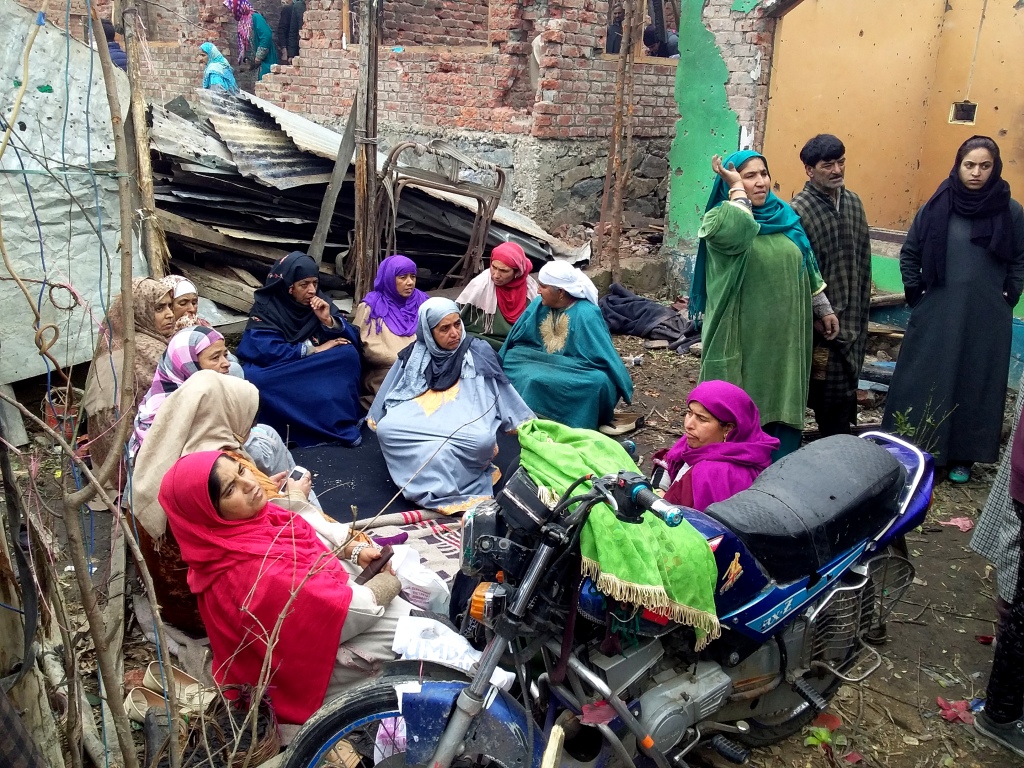 Families telling their tales of sufferings to the visitors

Begum said that she was worried how they will face the bone-chilling winters.

“People will come and go. At the end, it is we people who have to arrange everything. We have no idea what we are going to do in the coming days”.

‘So much fire power used’ 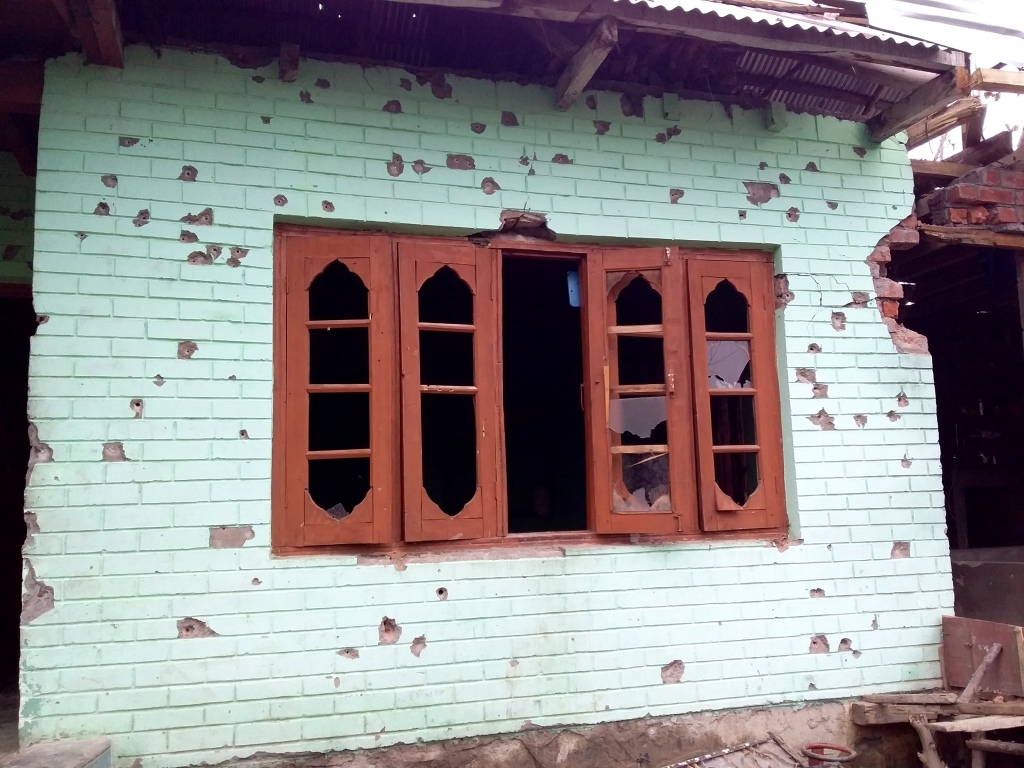 “They (army) used so much ammunition as if it was a war going on between India and Pakistan on the border,” a resident of Mujgund, Ghulam Rasool Bhat, said.

Bhat said the fight started at 5 pm on Saturday evening and continued for the whole night till 11 am, Sunday morning.

“In between this time, army used rockets, shells and countless bullets,” Bhat said.

“The intensity of those explosions was such that it shook the ground, whole area, but could not kill the lone militant who fought for whole night and well into morning”.

Giving more details about the gun battle, family members said that army and police crashed into their houses and asked them to leave within fraction of seconds.

“They even beat some women,” Laali begum said.

“We left everything back there. We had no time. We were given choice between life and death”. 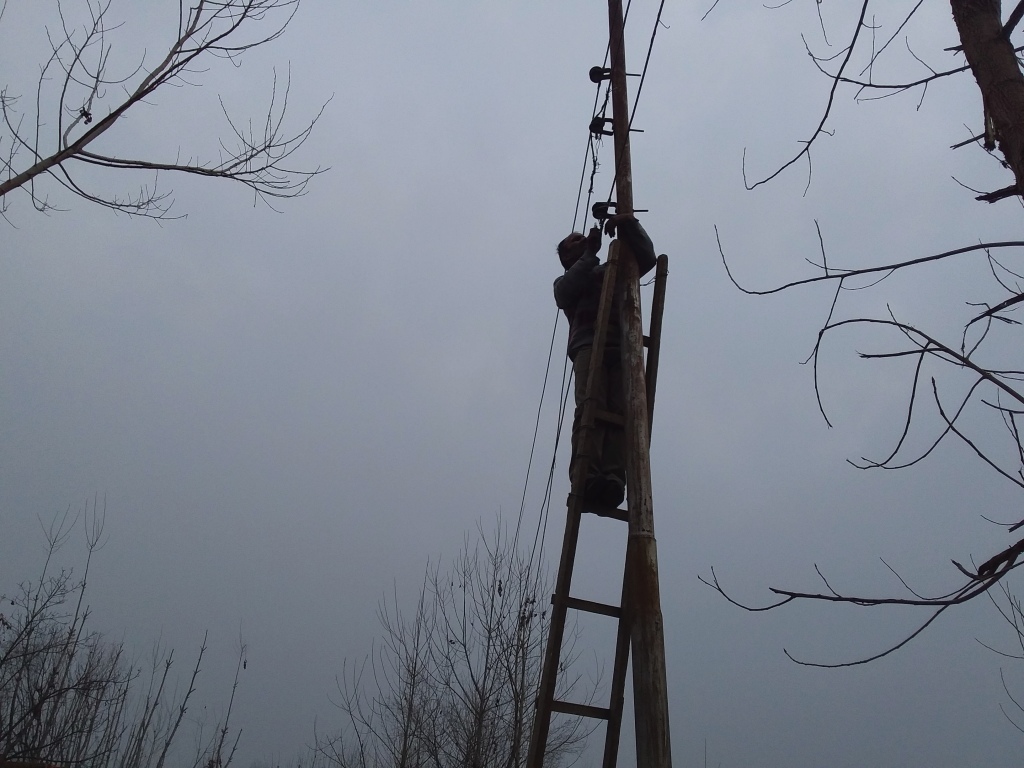 A resident, living close to the encounter site, said when forces surrounded the houses where the militants were trapped, a volley of bullets came from the house located in the middle of seven houses, arranged  horizontally.

“The first burst of fire left many of the army men injured,” a resident of Mujgund said.

“Afterwards, army did not come closer to houses. It started firing rockets and shells from quite a long distance. They used so much fire power. The thuds of the explosives could be heard from a distance. I believe they fired 150 rockets and shells, let the countless bullets alone ”. 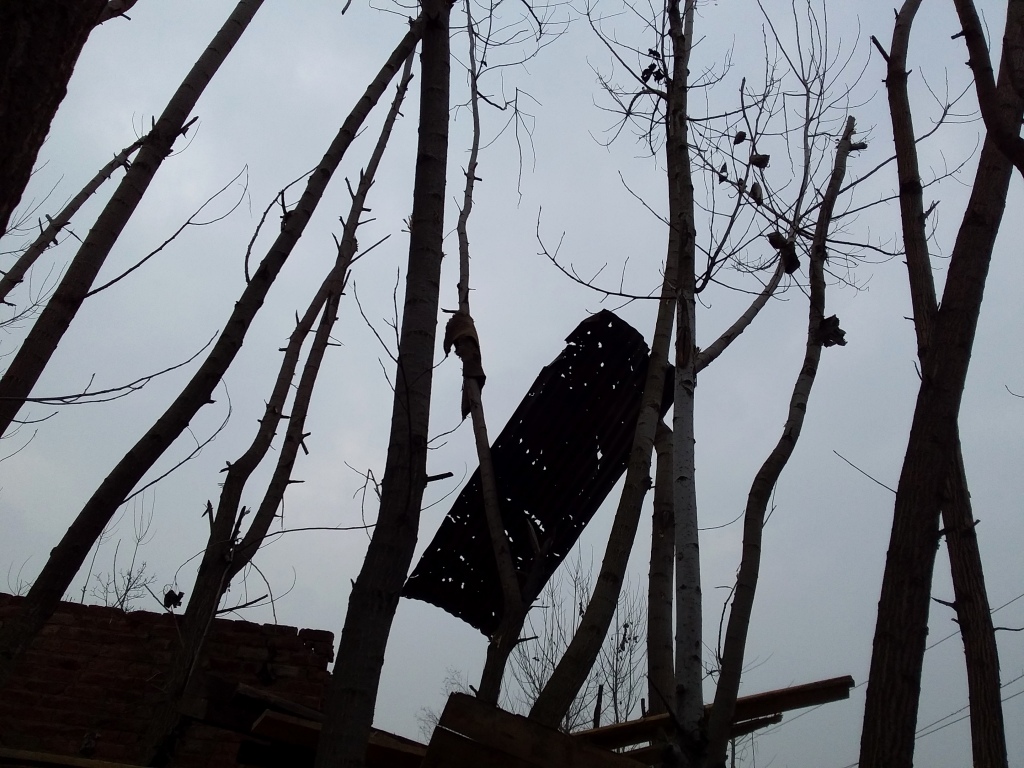 Corrugated tin sheets, peppered with bullets, stuck in trees due to explosions

The residents said that one of the militant, presumably a Pakistani, kept them engaged for 18 hours.

“He used to move from house to house. Whenever he would fire shot from one location, the army would direct bullets and rockets in that particular direction. By that time he would have change his location,” residents said.

“This continued till 11 am Sunday”.

The encounter left three militants dead. It included Mudasir Parray, 14 and Saquib Mushtaq, 17 of Hajin area of north Kashmir. The third one was identified as Ali Bhai of Pakistan.

The affected families, however, maintain that the three militants were not present in their houses.

“If this would have been so, we would have never regretted the lost. They were our sons,” a lady, whose house was destroyed, wearing a blue head scarf, narrated to the visitors.

She said that the trio were actually walking down the road when suddenly the army vehicles appeared and started chasing them.

“It seems thereafter they rushed to save their lives and jumped into one of our house from the rear end bordering the Jehlum,” the lady said as she sat in veranda of her destroyed house.

“We were left confused when the encounter started”.

“Now as everything lies shattered, one thing which gives satisfaction is that our lives are saved. Nothing can compensate life and well being”. 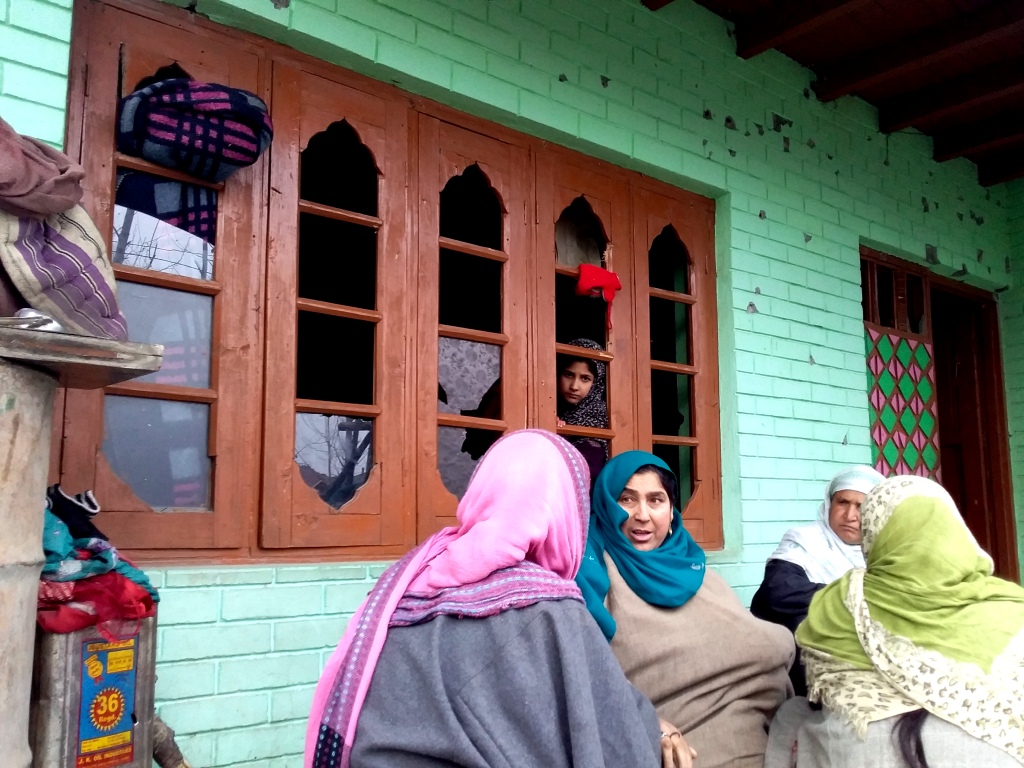 A women, wearing a blue scarf and hold Kangri (firepot) in the foreground, narrating visitors about the gunbattle. The little girl behind her, peeping through the window, holding a new born baby

Just behind her, a little girl, holding a new born baby, was looking at the visitors from the broken window pane of the house. She was intently listening to the woman in blue scarf.

Later, she lost the interest in the conversation. She suddenly turned into the room and rocked the new born baby in her arms. She was smiling and playing with him inside the house which got destroyed during the encounter.