Srinagar: Governor Satya Pal Malik has written back to National Conference President, Omar Abdullah,  wherein he said that no procedural changes, governing the Permanent Resident Certificates (PRC’s), is under consideration. 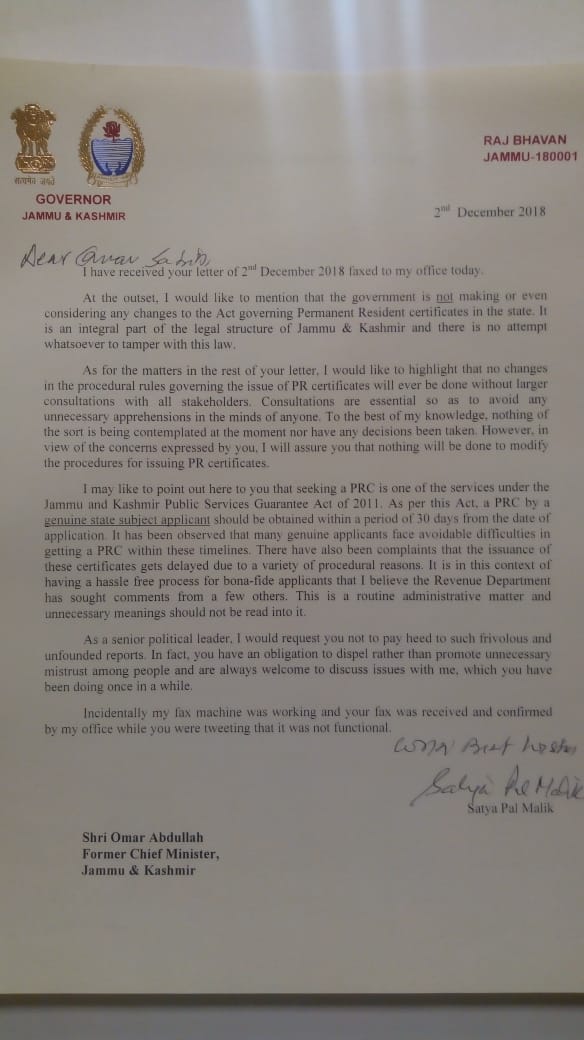 Governor Satya Pal Malik has made it clear that the State Government is not making or even considering any changes to the Act governing Permanent Resident Certificates in the state.

“It is an integral part of the legal structure of Jammu & Kashmir and there is no attempt whatsoever to tamper with this law,” Governor said in a communication addressed to the former Chief Minister and National Conference Vice-President Omar Abdullah.

Earlier during the day, Omar Abdullah had in a letter addressed to the Governor had brought to the notice of the Governor some media reports that the Governor’s Administration was planning changes in the procedure for granting PRCs seeking rollback of, if any decision, taken in this regard.

Governor has in his detailed reply to Omar Abdullah reiterated that no changes in the procedural rules governing the issue of PR certificates will ever be done without larger consultations with all stakeholders.

“Consultations are essential so as to avoid any unnecessary apprehensions in the minds of anyone. To the best of my knowledge, nothing of the sort is being contemplated at the moment nor have any decisions been taken. However, in view of the concerns expressed by you, I will assure you that nothing will be done to modify the procedures for issuing PR certificates,”  Governor said.

“I may like to point out here to you that seeking a PRC is one of the services under the Jammu and Kashmir Public Services Guarantee Act of 2011. As per this Act, a PRC by a genuine state subject applicant should be obtained within a period of 30 days from the date of application. It has been observed that many genuine applicants face avoidable difficulties in getting a PRC within these timelines. There have also been complaints that the issuance of these certificates gets delayed due to a variety of procedural reasons. It is in this context of having a hassle free process for bona-fide applicants that I believe the Revenue Department has sought comments from a few others. This is a routine administrative matter and unnecessary meanings should not be read into it,” the communication states adding; “As a senior political leader, I would request you not to pay heed to such frivolous and unfounded reports. In fact, you have an obligation to dispel rather than promote unnecessary mistrust among people and are always welcome to discuss issues with me, which you have been doing once in a while.”