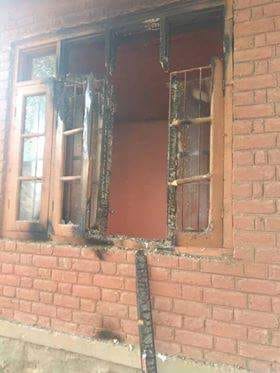 Srinagar: A panchayat ghar was set ablaze in north Kashmir district of Baramulla, taking the told number of such government buildings damaged in less than three months in the valley to nine.

Official sources on Sunday said that unidentified miscreants set on fire a panchayat ghar at a village in the apple township of Sopore in Baramulla late on Saturday evening.

Fire tenders were immediately rushed to douse off the leaping flames, clearly visible from a distance.

“Fire fighters with the help of locals were able to bring the fire under control,” they said, adding the building was partially damaged.

“Police have registered a case and initiated investigation to nab the culprits behind the crime,” they said.
They said with this, nine panchayat ghars have been set ablaze in the valley, particularly in south Kashmir, since the panchayat and Urban Local Bodies (ULB) polls were announced in the state.

The ULB polls, for which results were declared earlier this month, witnessed abysmal voter turnout in the valley following boycott call give by separatists and militants.

Two main regional political parties, including National Conference (NC) and Peoples Democratic Party (PDP), besides CPI(M) had boycotted the polls, alleging that the centre and state government didn’t clear its stand on Article 35-A.

Meanwhile, the panchayat polls, which will be held in nine phases in the state, will commence from November 17. (UNI)