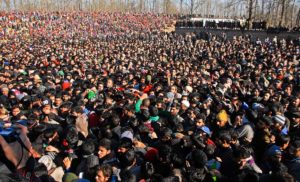 A social media user, Omair Bhat, wrote the following passage while describing the scene in the aftermath of the killing of scholar turned militant commander Manan Wani at his native place in Tiki Pora, Sogam, Lolab area of north Kashmir’s Kupwara district.

Thousands of people ( men, women , children, across all age groups ) have gathered in pahel maidan, in Tekipora to bid final farewell to the ‘ luminary of lolab ‘, Commander Manaan Wani. He left us too early. More people are gathering. He’ll not be buried in the local Martyrs Graveyard since he’d wished, some time back, that when he achieves martyrdom ( who knew this sooner ) he should be buried in the graveyard of ‘ astaan ‘ only, under the shade of pines. The final resting place, a jannat, a paradise. I am struggling to write this. Some of us who knew Commander would tell you why it’s difficult to come to terms with the brutal truth that he’s no more. My mother on call tells me : he was a beautiful rose from heaven and returned to the calling , a beckon from heaven where he belonged.

Wani, who was a PHD scholar, along with his associate, were killed during a gunfight with government forces Thursday morning at Handwara area of north Kashmir.