Kashmir had the same rights to justice and dignity as people all over the world: UN Human Rights Council

Reiterates establishment of inquiry commission, access to Jammu and Kashmir 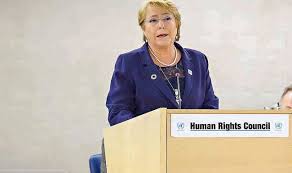 In her first address to the United Nations Human Rights Council, UN High Commissioner for Human Rights Michelle Bachelet has said that Kashmir had the same rights to justice and dignity as people all over the world.

In her opening remarks at the 39th session of the UN Human Rights Council, Bachelet said the people of Kashmir had the same rights to justice and dignity as people all over the world, the Indian express newspaper reported.

“The people of Kashmir have exactly the same rights to justice and dignity as people all over the world and we urge authorities to respect them,” she said.

Bachelet also reiterated the UNHRC’s request for unconditional access to Kashmir on either side of the Line of Control.

“The Office of the HRC continues to request permission to visit both sides of the LoC, and in the meantime, will continue its monitoring and reporting,” she was quoted by the Indian express as stating.

In his report to the UN Human Rights Council in June, Bachelet’s predecessor Zeid Hussain had sought an “establishment of a commission of inquiry to conduct a comprehensive independent international investigation into allegations of human rights violations in Kashmir”.

However, India reacted sharply to the report, calling it “fallacious, tendentious and motivated”, and lodged a strong protest with the United Nations.

“The report violates India’s sovereignty and territorial integrity. The entire state of Jammu and Kashmir is an integral part of India. Pakistan is in illegal and forcible occupation of a part of the Indian state through aggression,” the Ministry of External Affairs had said.

She also urged India and Pakistan to take meaningful action on addressing issues highlighted in the UN report on human rights violations in Kashmir.

This was part of a written statement by the new UNHRC chief.