'Resistance camp benefited by selling the concept of Azaadi' 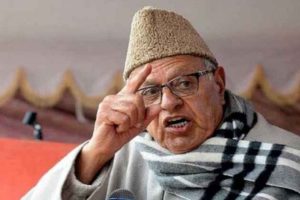 Srinagar: In a veiled reference to New Delhi, National Conference (NC) leader Farooq Abdullah has said that Kashmiris should be not be considered as enemies of India, but part of it.

“Do not consider us enemies of India,” Abdullah told the Republic TV Editor Arnab Goswami in a fiery interview recently.

“We are part of India. This is our nation. Embrace us with all the love”.

The visibly angry Abdullah, who also happens to be the NC President, was speaking after he was heckled during the Eid-Ul-Azha prayers at Dargah Hazratbal.

The worshippers, part of the congregational prayers, raised slogans in favour of Azaadi (freedom) and against Abdullah.

I went for prayers. I sat and the Moulana was speaking and these few people at the back were shouting Hum Kiya Chahtay Azaadi and go back.  Who were they to ask me to go back. I am part of this soil. And you think I am going to run away. I sat there, offered my prayer, and I said go on barking as you can, it does not effect me. I’m not a traitor. I’ll never be a traitor. They don’t realise. We’re part of 1.25 billion people. We are! We’re not just 1 crore or 1.5 crore. We’re 1.2 billion people,” Abdullah told The Republic TV while referring to the incident at Hazratbal Shrine.

“I said Bharat mata ki Jai aur Jai hind. We are part of the nation and these fools think by doing these things they are going to change the course of history. They are wrong, totally wrong, and we should condemn them by all our might.

“Now it will affect my judgement about them. They have destroyed the state for the last 30 years and these people must remember they are the enemies of the people”.

“”Are we not a part of India? Are we a part of Pakistan? No, we are not. We will live and die in this nation. We are not traitors. We Kashmiri are also a part of this country and want to progress in this country. Our people are lagging behind and the country is running at a fast pace. If we want to change this then we have to work towards the problems and uplift ourselves. Sloganeering won’t help”.

Are we not a part of India? Are we a part of Pakistan? No, we are not. We will live and die in this nation. We are not traitor

He affirmed the stand of Goswami that resistance camp has hugely benefited by “selling the concept of Azaadi” to the Kashmiris.

“Will chanting (‘Musa Musa’) change anything? Will it change the border? They’re fools! And I want to tell those who are behind them, ‘You will never succeed! You will pay a very heavy price one day for this,” Abdullah said

“They think that Farooq Abdullah will get threatened by these tactics but nothing and no one can scare me. Death is in the hands of God. Today, I am asking, what is their purpose? What’s the intention? If they think that this will get them ‘Azaadi’ then I would like to say that they should first free themselves from poverty, diseases and hunger. Those who hide in the shadow and chant slogans, I want to tell them that this will not bring peace. For ages this border stands tall, we have witnessed wars so, it is high time we talk peace. This is our Nation and we should love with peace. And all these people try to create a disturbance. What was the need for all this on Eid?”

“You are my unlikely hero for the day,” Arnab replies.

“I will be your hero for all the times to come,” Abdullah said.